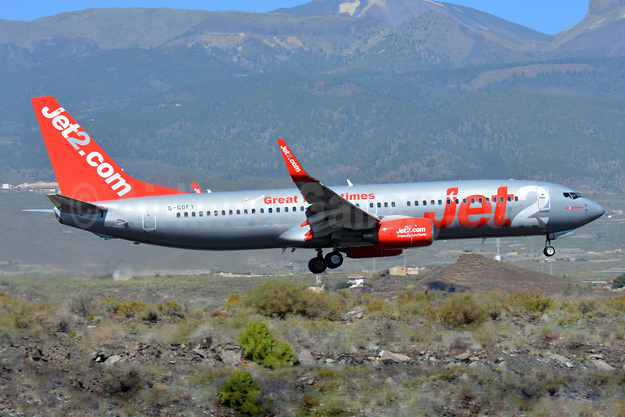 Jet2-Jet2.com (Leeds/Bradford) has finalized an order for three Next Generation 737-800s, valued at $288 million at current list prices.

Jet2.com previously ordered 27 Next Generation 737-800s in September 2015 and operates an all-Boeing fleet of more than 60 airplanes.

Jet2.com is a subsidiary of Dart Group PLC, a UK Aim listed Leisure Travel and Distribution & Logistics Group. The Company commenced commercial aircraft operations in 1983 and passenger flights to sun destinations from Leeds-Bradford Airport in 2003.

Jet2.com now flies over three million customers each year through a combination of package holidays and flight only services to 55 destinations across 364 holiday resorts from seven Northern departure bases.

The newer Boeing 737s will help the carrier retire its Boeing 737-300 Classic fleet.

Jet2 (Jet2.com) (Leeds/Bradford) has announced a major expansion at Edinburgh Airport with 12 new destinations for the summer season of 2016.

The carrier will start flying to the three new Canary Island destinations in February 2016. The airline will add a fifth based aircraft at EDI, a Boeing 737-800.

Sunwing Airlines (Toronto-Pearson) has seen some of its Canadian traffic being syphoned by U.S. carriers with vacation flights leaving from close-by U.S. cities like Buffalo, New York. Canadian citizens have been crossing the border to catch the cheaper flights at these close-by U.S. airports. Now the Canadian carrier has decided to do the same thing.

The new routes represent the first direct scheduled international destinations to be offered, increasing the number of airports accessible via a direct connection from Buffalo Niagara International Airport.

According to the carrier, these “low cost, high frills” flights enable travellers to start off their vacation in style with a complimentary welcome glass of champagne. Passengers will also be able to sit back and relax while enjoying award winning onboard service along with Hot & Fresh Bistro meals served with a choice of wine plus complimentary in-flight entertainment and children’s activity kits.

Sunwing travellers departing from Buffalo this winter will be able to choose from a broad selection of all-inclusive vacation packages in both Punta Cana, Dominican Republic and Cancun, Mexico. Offering an array of properties and exclusive products to suit a number of different tastes and budgets ranging from adults only to group and family vacations, Sunwing resorts in both locations stand out for their beachfront settings, wealth of land and water sports, varied dining options and children’s activities.

Copyright Photo: El Al/UP. The inaugural flight ceremony at the gate before boarding.

The inaugural flight to Berlin was piloted by Captain Hovev Ben David, Manager of the 737 fleet, together with First Officer Izhar Katzir (below).

The business model combines a low base fare and passengers can add for additional services – such as seating, check-in at the airport, baggage and other services.

Economy Class passengers may order meals, for a fee, from an UP menu that will be offered to them during the flight.

The menu includes a selection of fresh products: sandwiches, salads, baked goods, muesli, as well as snacks, soft drinks, hot drinks and alcoholic beverages. The fresh food offered for sale, including sandwiches, are Mehadrin kosher with certification provided by the Chief Rabbinate under supervision of Rabbi Moshe Nachshoni. All ingredients have Badatz kashrut certification.

El Al Israel Airlines (Tel Aviv) has agreed to be the launch customer in Europe for Exede® In The Air in-flight Internet service from ViaSat Inc. To begin, ViaSat plans to deliver the service to El Al Boeing 737s flying routes from Tel Aviv into several European cities. The two companies plan to immediately begin working toward certification and installation of the Exede terminals on EL AL aircraft with a target date to launch service within one year.

For El Al, ViaSat is responsible for providing and managing a complete in-flight Internet service to the aircraft, including airborne terminals, antennas, radomes, and air time from the Eutelsat KA-SAT high-capacity Ka-band satellite. Additional details of what services will be offered to EL AL passengers will be announced closer to the launch of service.

Exede in-flight Internet service is designed to eclipse the service quality and speeds of other in-cabin airline broadband services. The major differentiator is an innovative, high-capacity Ka-band satellite system developed by ViaSat. The more favorable economics of the ViaSat system enable airlines to provide a consistent, high-speed service level to each passenger, rather than simply an aggregate amount of bandwidth to the plane that leaves passengers competing for service. The system is capable of delivering 12 Mbps or more to each connected passenger.