Okay Airways (OKAir) (Tianjin) and Boeing (Chicago, Seattle and Charleston) yesterday (January 30) celebrated the delivery of the carrier’s first Next-Generation 737-900 ER (Extended Range). The delivery marks the first 737-900 ER to be delivered to a Chinese customer and is the first of eight 737-900 ERs that Okay Airways has on order.

Okay Airways’ new 737-900 ER is configured with 200 seats in a one-class layout. It will feature Boeing’s Sky Interior.

Okay Airways, the first privately owned airline in China, is headquartered in Beijing with its main hub at Tianjin Binhai International Airport (TSN). Its jetliner fleet includes 13 Boeing 737-800s and one Boeing 737-300 Freighter, which serves more than 100 domestic and international routes. 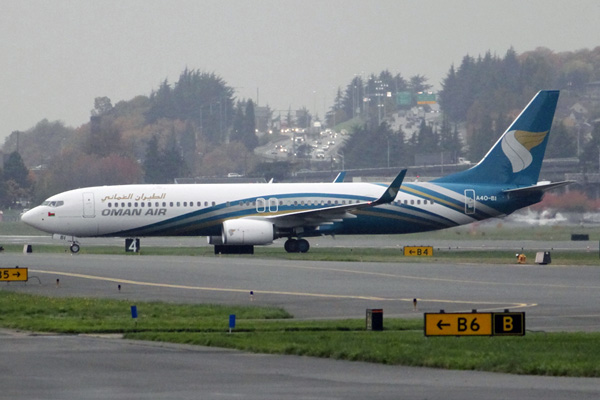 The remaining four aircraft are due to be delivered by November 2015.

Delta Air Lines (Atlanta) on January 5, 2015 will introduce the Boeing 737-900 ER on the Los Angeles-Guadalajara route followed by Los Angeles-Phoenix on February 13, 2015 per Airline Route.

Additionally for next summer, Delta plans to use the stretched 737 on the Atlanta-Grand Cayman route weekly on Saturdays from June 8 through August 15, 2015.

Okay Airways, the first privately owned airline in China, also announced it will convert five 737-800s from a previous order into 737-900 ERs (Extended Range). With today’s conversion announcement, Okay Airways will be the first airline in China to operate the 737-900 ER and has eight of the airplanes on order.

Okay Airways is headquartered in Beijing with its main hub at Tianjin Binhai International Airport. Its jetliner fleet includes 12 Boeing 737-800s and one Boeing 737-300 Freighter, which serves 40 domestic destinations.

Alaska Airlines (Seattle/Tacoma) today announced an order for 50 Boeing aircraft, including the 737 MAX—the new engine variant of the world’s best-selling airliner. The aircraft, which will be delivered between 2015 and 2022, represent the largest order in Alaska Airlines’ history and are worth $5 billion at manufacturer’s list prices.

Alaska Airlines currently operates 120 Boeing 737s. The new firm aircraft order, plus 25 existing firm delivery positions, give the carrier the flexibility to manage its fleet size to meet air travel demand over the next decade. Two-thirds of the aircraft are expected to replace older airplanes. The remaining firm orders and options will enable Alaska Airlines to grow assuming sufficient customer demand and that the company continues to achieve its profit and return on invested capital goals.

All of Alaska’s new aircraft will feature the Boeing Sky Interior, with overhead bins that provide more storage and passenger headroom, variable ambient cabin lighting and, on the 737-900ER, Recaro leather seats with an innovative design that provides more legroom.

The 737 MAX will be equipped with the new LEAP-1B engine under development by CFM International, a joint venture between GE Aviation in Ohio and France-based Snecma (Safran group). The MAX will also feature raked “dual feather” winglets and a more aerodynamic tail cone. The aircraft is expected to be 13 percent more fuel efficient than today’s most fuel-efficient single-aisle aircraft.

United Continental Holdings, Inc. (Chicago) announced plans to launch service on several new nonstop routes in 2011 as it begins to optimize the combined route networks of United Airlines and Continental Airlines. Even with these new route additions, operated by a mix of mainline and regional aircraft, United and Continental will remain within previously announced capacity guidance.

United Continental Holdings, Inc. is the new holding company for both United Airlines and Continental Airlines. Together with United Express, Continental Express and Continental Connection, these airlines operate a total of approximately 5,800 flights a day to 371 airports on six continents from their hubs in Chicago, Cleveland, Denver, Guam, Houston, Los Angeles, New York/Newark Liberty, San Francisco, Tokyo and Washington, D.C. United and Continental are members of Star Alliance, which offers more than 21,200 daily flights to 1,172 airports in 181 countries worldwide through its 28 member airlines.