PIA-Pakistan International Airlines (Karachi) retired its last two Boeing 737-300s (AP-BCD and AP-BCF) on June 17 according to The History of PIA.

Shandong Airlines (Jinan, Shandong Province, China) has announced its intention to order 50 Boeing 737 aircraft including 16 Next-Generation 737s and 34 737 MAXs for delivery between 2016 and 2020. The order has not yet been finalized.

Shandong Airlines’ commitment to order 50 Boeing 737s, including 16 Next-Generation 737s and 34 737 MAXs. The airline plans to expand its capacity to meet growing demand in China and Northeast Asia, one of the most dynamic markets for commercial airplanes.

Air Lease Corporation has announced the long term lease of one Boeing 737-700 jet aircraft (msn 33015) to Airzena Georgian Airways (Tbilisi, Georgia). The aircraft is scheduled for delivery in October, 2013.

Airzena Georgian Airways is the designated national airline of Georgia, operating extensive scheduled services to many destinations in Europe, the Mediterranean, the Middle East and Russia, with Boeing 737s and CRJ regional jets.

Malindo Air is a joint venture between National Aerospace and Defence Industries (NADI) (51%) (Malaysia) and Lion Air (Jakarta, Indonesia) (49%). The name “Malindo” is a contraction of Malaysia and Indonesia.

Next the airline will add service from Kuala Lumpur to Bintulu, Miri, Sandakan and Sibu.

Read the full full story from The Star: CLICK HERE 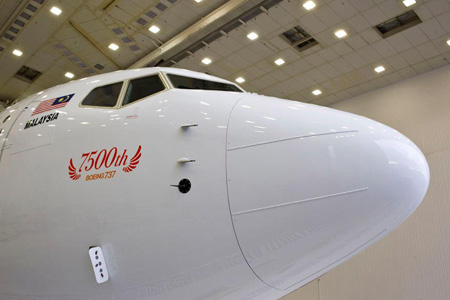 Editor’s “To The Point” Observation: This new launch will sharpen the competition between AirAsia and Lion Air. To underscore this point, please read this report from Reuters about this growing feud: 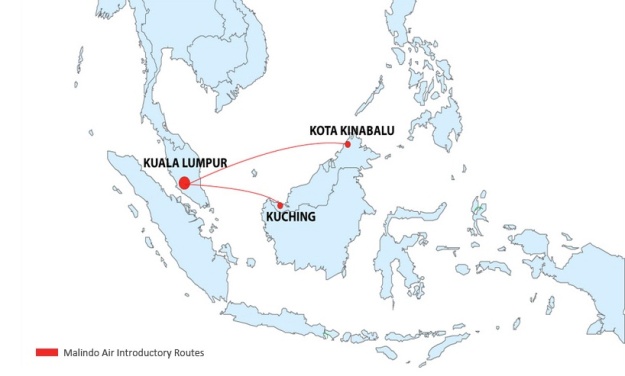 Vision Airlines (Atlanta) started a new route linking Sanford (near Orlando) and Gulfport/Biloxi on February 6 per Anna Aero. Gulfport/Biloxi appears to be location of its current winter operations. The airline operates Boeing 737s on the two routes (see map below). The carrier has continuously shifted its route map in search of a winning winter/summer combination.

In June 2012 the airline cancelled its agreement with Globespan Aviation due to “Globespan’s failure to meet its financial obligations under the contract.” Globespan had tried to start a program to South Korea using Vision Airlines Boeing 767-200 ER but according to the airline, “it appears they do not have the financial support for the program.”

Please click on the map for the full-size view.

LOT Polish Airlines (Warsaw), because of its continued financial losses, is going to shrink in size according to this report by the Wall Street Journal. The carrier is phasing out its Boeing 737s and 767s. The Polish government, which controls 93 percent of the stock, issued $127 million in emergency loans to the struggling state carrier on December 21 to keep it out of bankruptcy. This loan, which may still be deemed illegal state aid by the European Commission, is keeping the airline aloft. The Polish government is restructuring the airline and only the most profitable routes will be kept. One half of the fleet is expected to be returned to the lessors according to the article.

Copyright Photo: Terry Wade. LOT is proud to be the first operator of the Boeing 787 Dreamliner in Europe but will it be able to continue to operate the new type? The 787 is planned to be assigned to the carrier’s long-range routes if those routes can be maintained with the restructuring. The first 787-8, SP-LRA (msn 35938) prepares to touch down at London (Heathrow) on its first visit.

Alaska Airlines (Seattle/Tacoma) today announced an order for 50 Boeing aircraft, including the 737 MAX—the new engine variant of the world’s best-selling airliner. The aircraft, which will be delivered between 2015 and 2022, represent the largest order in Alaska Airlines’ history and are worth $5 billion at manufacturer’s list prices.

Alaska Airlines currently operates 120 Boeing 737s. The new firm aircraft order, plus 25 existing firm delivery positions, give the carrier the flexibility to manage its fleet size to meet air travel demand over the next decade. Two-thirds of the aircraft are expected to replace older airplanes. The remaining firm orders and options will enable Alaska Airlines to grow assuming sufficient customer demand and that the company continues to achieve its profit and return on invested capital goals.

All of Alaska’s new aircraft will feature the Boeing Sky Interior, with overhead bins that provide more storage and passenger headroom, variable ambient cabin lighting and, on the 737-900ER, Recaro leather seats with an innovative design that provides more legroom.

The 737 MAX will be equipped with the new LEAP-1B engine under development by CFM International, a joint venture between GE Aviation in Ohio and France-based Snecma (Safran group). The MAX will also feature raked “dual feather” winglets and a more aerodynamic tail cone. The aircraft is expected to be 13 percent more fuel efficient than today’s most fuel-efficient single-aisle aircraft.

Aviation Partners Boeing (APB) (Seattle) has announced  the largest single order in its history, with Southwest Airlines (Dallas) purchasing up to 268 additional sets of Blended Winglets for Boeing Next-Generation 737-700 and 737-800 aircraft, surpassing its original order placed in 2003.  This order will ensure that all of Southwest’s future Boeing Next-Generation 737 aircraft will be equipped with Blended Winglets until Southwest Airlines transitions to the Boeing 737 MAX.

Blended Winglets provide the most reliable form of fuel hedging available in today’s volatile fuel market; the performance lasts for the life of the aircraft and regardless of fuel price — they continue to generate savings. To date, Aviation Partners Boeing estimates that Blended Winglet Technology has saved airlines worldwide more than 3.3 billion gallons of jet fuel.

Belavia Belarusian Airlines (Minsk) has announced it will launch a new route from its Minsk hub to Barcelona, Spain on December 26. The new route will be operated twice-weekly with Boeing 737s.