Hainan Airlines (Haikou and Beijing) today announced it plans to launch nonstop service from Boston’s Logan Airport to Beijing on June 20, 2014. This will represent the first scheduled nonstop flight from Boston to Mainland China in history – and with the industry’s most advanced airliner – the Boeing 787 Dreamliner.

Hainan Airlines will operate the flights every Monday, Wednesday, Friday and Saturday.  With its international hub at Beijing, Hainan will offer connections to cities throughout China, including Shanghai, Guangzhou, Fuzhou, Xi’an and Haikou. Travelers may stopover in Beijing in either direction and connect with numerous additional Chinese cities across the Hainan network such as Chengdu or Dalian. The new Boston flight will complement the carrier’s existing North American service to Beijing from Seattle, Chicago and Toronto.

Qatar Airways (Doha) announced it will begin flights to the Scottish capital of Edinburgh effective May 28, 2014, operating five flights weekly.

The new route will be served by a Boeing 787 Dreamliner in a two-cabin configuration, offering passengers 22 Business Class and 232 Economy Class seats. The schedule for the new destination is as follows:

Qatar Airways‘ (Doha) grounded Boeing 787-8 A7-BCB (msn 38320) was returned to service yesterday (July 31) after being grounded by the airline since July 21 due to unspecified “technical issues” according to this report by Reuters. A7-BCB successfully operated a round trip between Doha and Frankfurt.

Qatar Airways (Doha) stated yesterday (July 26) it had taken one of its Boeing 787-8 out of service for a “minor” technical issue according to this report by Reuters. New pressure is mounting on Boeing over possible new electrical problems.

The airline and Boeing declined to give further details but industry sources said they were treating seriously reports that the aircraft had been grounded for days after smoke was seen near an electrical panel according to the report.

British Airways (London) has confirmed it will introduce the new Boeing 787 to both Toronto (Pearson) and Newark as the first two 787 routes. The 787 will debut on the London (Heathrow)-Toronto (Pearson) route on September 1 and the Heathrow-Newark route a month later. The new 787s and Airbus A380s will replace the 30 older Boeing 747-400s between 2017 and 2023.

Copyright Photo: Nick Dean/AirlinersGallery.com. Boeing 787-8 G-ZBJB (msn 38610) was handed over by Boeing on June 25 followed by the pictured G-ZBJA (msn 38609) on June 29. Crews are currently undergoing training with both aircraft.

United Airlines (Chicago) is planning to introduce the new Boeing 787-8 on the Seattle/Tacoma-Tokyo (Narita) route on November 5, replacing the Boeing 777-200 ER currently operating on the route according to Airline Route. ANA also operates the 787 on the same route.

In other news, United is dropping the Newark-Buenos Aires route on September 29 per Airline Route. In addition, the Newark-Istanbul will be cancelled on October 26, 2013 (probably for the winter season).

Ethiopian Airlines (Addis Ababa) has announced that it has added South America, the fifth continent in its route network, with the launching of new services to Sao Paulo and Rio de Janeiro, Brazil as of today – July 1, 2013.

Ethiopian flight to Brazil are operated through its second hub in Lomé, Togo, three times a week. The addition of Sao Paulo and Rio de Janeiro will bring the number of its international destinations across five continents to 75. The flights will be the only connection between West Africa and Brazil.

Qatar Airways (Doha) has announced an expansion of its Boeing 787 services to Europe with the new state-of-the-art aircraft being deployed on three Scandinavian routes.

The Doha-based carrier will launch 787 flights to the Swedish capital Stockholm on August 1, followed a month later to both Copenhagen and Oslo – capital cities of Denmark and Norway, respectively, effective September 1.

Qatar Airways operates daily flights to each of the three Scandinavian capitals from its hub, capital of the State of Qatar, with a total weekly capacity of 21 services.

Qatar Airways has 254 custom-made seats across its 787 Business and Economy Class cabins with specially designed interiors. Business Class is configured 1–2–1 with 22 seats, while Economy has a 232 seating capacity in a 3–3–3 layout. All seats in Business Class are fully reclinable.

The airline’s 787s are the world’s first fully connected Dreamliners with wireless facilities for passengers to remain in touch with friends and colleagues on the ground through the internet and SMS mobile texting across both Business and Economy cabins.

Made up of composite materials, the 787 Dreamliner is lighter and more fuel-efficient than any comparable aircraft of its size and range. Unique features include larger windows, reduced cabin noise and cleaner cabin air.

In other news, Qatar Airways intends to introduce its first Airbus A380 on the Doha-London (Heathrow) route followed by Doha-Paris (CDG) in early 2014.

Qatar Airways currently has 13 Airbus A380s on order with plans to operate them on popular routes, especially in slot-constrained airports. The first A380 will arrive in early 2014.

British Airways has announced that the airline will operate the 787 from Heathrow to Toronto (Pearson) from September 1 and Heathrow to Newark from October 1.

“The delivery of the first of BA’s 787s is an exciting milestone for Boeing and British Airways,” said Todd Nelp, vice president of European Sales, Boeing Commercial Airplanes.  “The 787 is the most technologically advanced and fuel-efficient commercial jetliner in its class. Its improved lighting, bigger windows, larger overhead bins, lower cabin altitude and cleaner cabin air will offer BA’s passengers an unparalleled flying experience.”

The 787 Dreamliner is composed of lightweight composites and features numerous systems, engine and aerodynamic advancements, with unmatched fuel efficiency using 20 percent less fuel than today’s similarly sized airplanes.  It is the first mid-sized airplane capable of flying long-range routes, providing airlines with unprecedented fuel economy and low operating costs and enabling airlines to open new, non-stop routes preferred by passengers. On a 787 with Rolls-Royce engines, UK companies make about 25 percent of the 787 by value.

British Airways operates more than 140 Boeing airplanes within its fleet including 52 777s, as well as the world’s largest fleet of 747s with 52.

To celebrate, the airline is launching special fares from both cities to London Heathrow. For travel from Toronto and New York (JFK or Newark), the fares begin at $787 roundtrip in World Traveller (economy). World Traveller Plus, the airline’s premium economy, fares begin from $1290 roundtrip and, continuing the celebrations, Club World business class fares start from $2787 roundtrip. All fares include taxes, fees and carrier charges.

The new 787 routes were announced in association with brand ambassador and star of stage and screen, Kim Cattrall (above). Kim, who born in England and raised in Canada said: “I fly regularly between the UK, Canada and the USA with British Airways and I love their service. I need to be ready to work when I land, so to know that I can fly on their 787s and arrive feeling really rested and refreshed is a definite bonus for me.”

Willie Walsh, chief executive of IAG, said: “The 787 is a tremendous, innovative aircraft which sets new standards for environmental performance and operating efficiency and I’m sure British Airways customers will love it.

“The 787 will become a mainstay of the British Airways fleet over the next few years. This is the first of 24 that will arrive by 2017, and we have announced plans to convert further options for the aircraft into firm orders for delivery from 2017, including for the new larger 787-10 version.”

Mitch Preston is British Airways’ first 787 pilot to fly the aircraft from Boeing’s Seattle home toLondon. Preston said: “It was a real pleasure to fly the 787 home to Heathrow today — it’s a joy to operate, and a really smooth ride.

“It’s exceptionally quiet and the cabin environment, combined with the service customers would expect from British Airways, will make for a great experience. I for one can’t wait to welcome our customers on board.”

British Airways has ordered 24 787s, which will arrive over the next four years. The airline has also ordered 12 A380s and six additional Boeing 777-300 ERs. Over the next 12 months, it will take delivery of a new aircraft at the rate of one a fortnight.

The aircraft orders form the centrepiece of British Airways’ [Pounds]5bn investment in improved customer experience in the air and on the ground. The airline is the first in Europe to operate both the 787 and the A380. 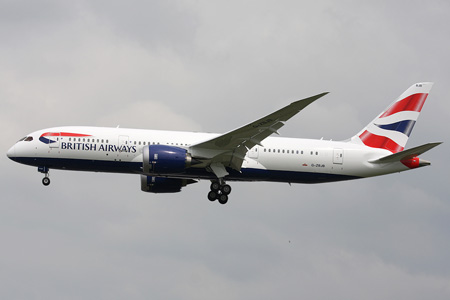 United Airlines‘ (Chicago) Boeing 787-8 flying from Houston (Bush Intercontinental) to Denver yesterday (June 23) as flight UA 94 was forced to divert and land at another airport because of a break warning light. This became the third 787 diversion in the past week according to ABC 7 News in Denver.