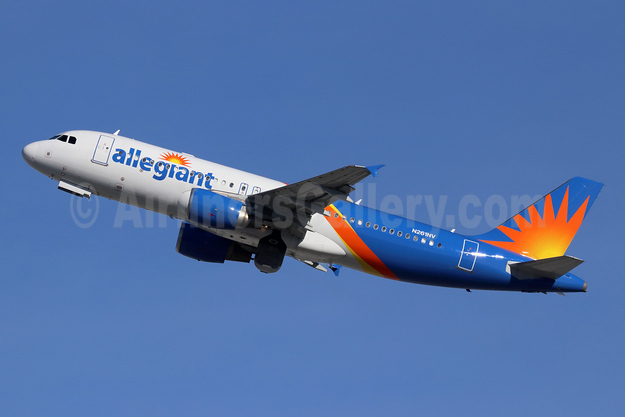 Allegiant Air today signaled its next phase of growth by filing an application with the U.S. Department of Transportation (DOT) to offer scheduled service between the United States and Mexico.

This will be the company’s initial venture into scheduled international service.

The DOT application is the first step in the process for Allegiant to begin scheduled service to Mexico. Projected dates and locations for commencement of service will be announced at later dates as the process moves forward.

Southwest Airlines (Dallas) for the first time will operate a summer Saturday schedule of 104 scheduled flights among a dozen airports in the continental United States and ten cities across the Caribbean, Mexico, and Central America.

At Los Cabos International Airport (SJD) near San Jose del Cabo, Mexico, Southwest flight 394 touched down on June 13 from Baltimore/Washington International Thurgood Marshall Airport (BWI), and was welcomed with a ceremonial water arch and a reception at the gate. The nonstop service to/from BWI and the international airport in Baja California Sur operates weekly on Saturdays, and is the carrier’s fourth nonstop market to the Cabo San Lucas region.

The carrier began service in its 95th city, Puerto Vallarta, Mexico, via Lic. Gustavo Diaz Ordaz International Airport (PVR) on Sunday, June 7, with daily, nonstop service to/from Orange County/Santa Ana (SNA) and connecting points across the U.S. The carrier has also announced daily, nonstop service between PVR and both Denver and Houston (Hobby). The Ministers of Tourism for both Mexican States of Jalisco and Nayarit are expected to welcome Southwest Airlines in its first month of serving Puerto Vallarta on June 18, the carrier’s 44th birthday.

Next up for Southwest is previously announced scheduled service to the carrier’s seventh near-international country and 96th destination, Belize City, Belize, made possible by a $156 million international terminal facility at Houston (Hobby) scheduled to open October 15, 2015. Then, on November 1, Southwest begins previously announced scheduled service between Houston and the carrier’s 97th city, Liberia, Costa Rica. Both routes are subject to foreign government approval.

Route Map: Southwest Airlines’ foreign expansion to Mexico, Central America and the Caribbean (click on the map for the larger view):

Alitalia (3rd) (Rome) is planning to launch a new route from Rome (Fiumicino) to Mexico City.

The Italy-Mexico Business Council was held in Milan at the Institute for International Policy Studies. Presided by Mexico’s President Enrique Peña Nieto and the Italian Council President Matteo Renzi, Alitalia signed a Memorandum of Understanding (MOU) with the Mexican Government aimed at opening a new direct flight from Rome to Mexico City. The agreement signed outlines the contributions and commitment of the parties aimed toward increasing tourism and economic growth for both countries.

The opening of this new route is made possible by the investment plan that Alitalia implemented which includes a renewal of the long-haul fleet.

The second new Airbus A330 for long-haul flights is now in service, complete with the new livery, redesigned interior and upgraded meal service in business class, as well as WiFi connectivity in all class cabins. The first newly styled and liveried A330 was unveiled on June 4. The addition of these two aircraft has increased the long haul fleet to 24, inclusive of 14 Airbus A330s and 10 Boeing 777s. The business plan forecasts an additional five new planes for long haul routes by 2018.

With the Mexico City agreement, Alitalia reconfirms its commitment to the development of the intercontinental network. Since the beginning of the year the company has already launched four new intercontinental flights to Seoul (from Rome), Shanghai (from Milan) and Abu Dhabi (from Milan Malpensa and Venice, added to the route from Rome). Flights between Rome and Beijing will begin in Fall 2015.

The debut is part of the steady growth by Spirit, which announced last year the addition of 10 new non-stop destinations out of IAH, bringing its total of routes served to 22. This includes expanded domestic service to Tampa and Baltimore/Washington, which began in March, and nonstop service to Oakland/San Francisco, which began in April.

Los Cabos will commence on October 8 and Puerto Vallarta the following day.

The flights will be operated with Boeing 737s on the following schedule:

AeroMexico (Mexico City) has announced that it will begin offering four weekly flights in April connecting Mexico City and Monterrey with the Boeing 787 Dreamliner.

Adding the Dreamliner to this route will also allow the airline to increase the seat capacity of its morning flights by 51%, meaning that more customers will be able to travel to and from Terminal B at the Monterrey International Airport, connecting to the other domestic and international destinations served by Aeromexico.

Delta Air Lines (Atlanta) will add two seasonal routes to Cancun, Mexico this summer from June 6 through August 28. Baltimore/Washington – Cancun and Pittsburgh – Cancun will both be operated weekly on Saturdays with McDonnell Douglas MD-88s per Airline Route.

American is taking delivery of more than 100 new aircraft this year, giving it the youngest fleet of any U.S.-based network carrier. Orders include the Airbus A320 and A320neo family, A350-900s, Boeing 737 MAX, 777-300ERs and 787s, which will make American’s fleet even younger, more modern and fuel efficient.