Singapore Airlines and Boeing on March 25 celebrated the delivery of the first 787-10 airplane, the newest and largest member of the Dreamliner family and a jet that will set a new global standard for fuel efficiency.

About 3,000 people marked the milestone at Boeing’s facility in North Charleston, South Carolina where the latest 787 model is manufactured (above).

Like the other 787 Dreamliners, the 787-10 is designed with strong, lightweight composites, the most advanced systems, and comfortable cabin features. The 787-10, though, features a longer fuselage which allows it to carry about 40 more passengers or a total of 330 seats in a standard two-class configuration.

With the additional capacity, the 787-10 provides airlines the lowest operating cost per seat of any widebody airplane in service today.

The 787-10’s superior performance and high commonality with its Dreamliner siblings have attracted strong interest from around the world, including in Asia where the jet can connect all points within the region. The 787-10 also offers Asian operators the flexibility to fly to Europe, Africa and Oceania.

Singapore Airlines plans to puts its 787-10s into scheduled service in May, with flights from Singapore to Osaka, Japan and Perth, Australia. Prior to the introduction of these services, the aircraft will be operated on selected flights to Bangkok and Kuala Lumpur for crew training purposes. 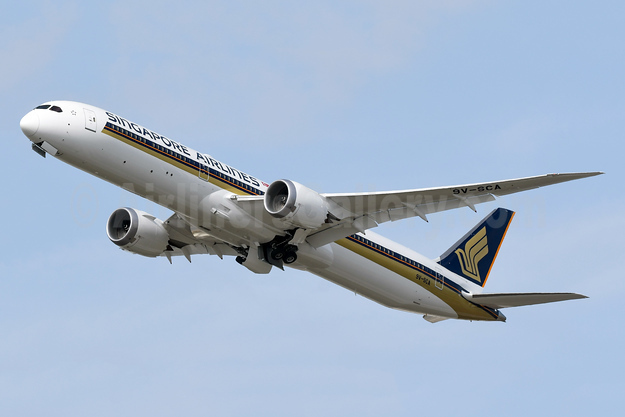 Perth will become the second scheduled destination to be served by Singapore Airlines’ new Boeing 787-10 fleet. Flights are expected to commence in May 2018, subject to regulatory approvals, initially on one of the Airline’s four daily flights between Singapore and Perth.

Prior to the launch of services to Perth, the 787-10s will be operated on selected flights to Bangkok and Kuala Lumpur for crew training purposes, before the first scheduled service to Osaka in May 2018.

Singapore Airlines will be the world’s first airline to operate the 787-10 and has 49 firm orders for this aircraft type. The Airline will take delivery of its first 787-10 from Boeing in March 2018.

Measuring 68 meters in length, the 787-10 is the longest variant of Boeing’s Dreamliner range of aircraft, which are constructed using technologically advanced lightweight composite materials.

Boeing (Chicago, Seattle and Charleston) has issued this statement:

Boeing started final assembly of the 787-9 Dreamliner at its South Carolina facility. The team began joining large fuselage sections of the newest 787 November 22 on schedule, a proud milestone for the South Carolina team and another sign of stability for the program.

The 787-9 complements and extends the 787 family, offering airlines the ability to grow routes opened with the 787-8. With the fuselage stretched by 20 feet (6 meters), the 787-9 can fly up to 40 more passengers an additional 450 nautical miles (830 kilometers) with the same exceptional environmental performance – 20 percent less fuel use and 20 percent fewer emissions than the airplanes it replaces. The 787-9 leverages the visionary design of the 787-8, offering passenger-pleasing features such as large, dimmable windows, large stow bins, modern LED lighting, higher humidity, a lower cabin altitude, cleaner air and a smoother ride.

Boeing (Chicago and Seattle) has announced that final assembly of the 787-10, the newest and longest member of the 787 Dreamliner family of airplanes, will take place exclusively in North Charleston, South Carolina.

Boeing will continue to assemble both 787-8s and 787-9s in Everett, Washington, and North Charleston. Design of the 787-10 is underway in Everett, with final assembly of the first 787-10 scheduled to begin in South Carolina in 2017.

“We looked at all our options and found the most efficient and effective solution is to build the 787-10 at Boeing South Carolina,” said Larry Loftis, vice president and general manager, 787 program, Boeing Commercial Airplanes. “This will allow us to balance 787 production across the North Charleston and Everett sites as we increase production rates. We’re happy with our growth and success in South Carolina, and the continued success at both sites gives us confidence in our plan going forward.”

The 787-10 will be 18 feet (5.5 meters) longer than the 787-9. With 10 feet (3 meters) of that increase in the midbody section, the 787-10 midbody is too long to be transported efficiently from North Charleston, where systems integration work is performed, to the Everett facility for final assembly. In addition, introducing the 787-10 in North Charleston takes advantage of that facility’s capacity while allowing the Everett facility to continue improving productivity as it focuses on the 787-8 and 787-9.

The Everett facility will continue to assemble seven airplanes per month, while Boeing South Carolina final assembly will gradually increase from three 787s per month today to five per month in 2016 and seven per month by the end of the decade.

The Boeing 787 Dreamliner family of airplanes offers airlines unmatched fuel efficiencies and environmental performance, while providing a new level of comfort for passengers through the thoughtful application of new technologies. To date, the 787 family has won more than 1,000 orders and more than 165 airplanes have been delivered to 21 customers worldwide.

The 787-10 will leverage 787 technology to provide more passenger and cargo capacity along with unparalleled seat-mile economics in the medium twin-aisle market. Since its launch in June 2013, the 787-10 has won 132 orders from six global customers.

Boeing (Chicago) announced it will begin construction in the second half of 2014 on a new paint facility on its main campus in North Charleston, South Carolina. The company expects to begin painting fully assembled 787 Dreamliners in South Carolina in mid-2016.

The approximately 230,000 square-foot (21,368 m2) facility will be used to apply customer liveries to Boeing South Carolina (BSC)-built 787s. Today all BSC-built 787s are flown to Fort Worth, Texas, for final paint and then flown back to South Carolina for customer delivery.

The company also announced it acquired access to a total of 468 acres (189 hectares) in North Charleston, S.C., to protect for potential future growth in South Carolina through a long-term lease with Palmetto Railways, a division of the S.C. Department of Commerce. In addition to the 267 acres (108 hectares) sold by the Charleston County Aviation Authority, another 201 acres (81 hectares) of land in North Charleston were purchased with state bond funds allocated to Boeing. Owned by Palmetto Railways, the land will be leased to Boeing under a long- term lease. The company has an option to purchase all of the 468 acres (189 hectares) at the end of the initial lease term at the end of 2027.

“This expansion makes future growth in North Charleston possible. While we expect to begin the permitting process immediately for this property, we have no specific plans for the land other than where we will locate the new paint facility,” said Jones.

As part of the site expansion, beginning in January 2014, Boeing will construct a new 10,000 square-foot (929.03 m2) fully equipped fire station at its main campus, which is expected to be operational by late 2014. The company will add a second autoclave in 2016 to support aftbody composite fabrication for previously announced 787 program rate increases.

“We’ve been busy here in South Carolina this year,” said Jones. “Our BSC teammates have not only been ramping to rate in component and airplane production, but they’re doing it in the middle of construction zones. Our commitment to South Carolina is visibly demonstrated every day as our growth and expansion continues. I don’t expect that ending anytime soon.”

Since late 2012, Boeing has been expanding its main South Carolina site to create more efficiencies and capabilities in production to meet committed 787 build rates. Under previously announced expansion plans, the company is adding 391,000 square feet (36,325 m2) to its aftbody fabrication and assembly building; 42,000 square feet (3,901.9 m2) to its aft and midbody component paint facility; 67,000 square feet (6,224.5 m2) in office and meeting space to its final assembly building; and a new 94,000 square-foot (8,732.9 m2) Dreamlifter Operations Center, to be completed in the first quarter of 2014. The midbody component assembly facility is undergoing construction to add additional capacity and efficiency on the production floor.

In 2013, Boeing announced plans to establish IT Centers of Excellence and an Engineering Design Center, along with plans to build a new Propulsion facility in South Carolina. In November, Boeing broke ground on the new 220,000 square-foot (2,0439 m2) facility located in Palmetto Commerce Park in North Charleston (Ladson area) that will house its new 737-MAX propulsion assembly work, scheduled to begin in mid-2015.

Boeing is currently considering offers from 22 states for a possible site to build the proposed 777X airplane. South Carolina is probably one of those states. Is Charleston International Airport (CHS) the new Paine Field (PAE)?