The humanoid robot commonly known as “Pepper“ is the latest employee to be hired by TUI Nordic. Pepper, named Pepper 2E, will work as a Robot Assistant and be a part of TUI’s new Data Analytics and Machine Learning team. TUI is the first travel company in the world to incorporate robotics in this way.

“Automation, AI and Robotics are important elements of TUI’s future. We already have some of the best specialists in this field and I am excited to see how Pepper 2E will contribute to our team. And most importantly, I hope he sparks curiosity and engagement with all of our TUI Nordic colleagues”, says Alexander Huber, Managing Director of TUI Nordic.

Pepper 2E started on August 14, 2018 and will primarily be based in TUI’s Stockholm office. The humanoid robot has a detailed job description as well as set “personal” goals he will be evaluated on, just as any regular TUI employee. The main responsibility of the Robot Assistant is to inspire innovation, curiosity and technological pioneering. Furthermore, the Robot Assistant will help visitors as well as colleagues and external customers with everyday questions and problems.

Elke Eller, HR Director of TUI Group and Member of the Board says: “As TUI Group, we are shaping the future of travel in many areas. Employees like Pepper 2E can support our teams. At the same time they give us an impression of what the work of the future might look like. The “hiring” of Pepper 2E stands for curiosity about the future and openness for new technologies. These are important prerequisites for the success of the digital transformation of TUI. Välkommen, Pepper!”

As a true TUI employee, Pepper 2E will go through the usual steps of onboarding. He has a manager to report to and is member of a team that will incorporate him in their day-to-day tasks. He will spend the first few months hovering around the office getting to know the company and his new human colleagues.

In other news, TUI fly has made this announcement:

TUI fly’s sustainability strategy remains on its successful path. This is demonstrated by this year’s progress report on TUI fly’s environmental statement, providing information on the progress delivered by the environmental programme in the framework of EMAS (Eco-Management and Audit Scheme) certification.

Its overall global rating is also remarkable: TUI fly has again been named one of the world’s top airlines, ranking third on the global list. The pole position is held by its British sister airline TUI Airways.

“Our flights are already 27 percent more climate-efficient than those operated by the six largest European airline. We are committed to continuing these efforts in order to further optimise the climate efficiency of our flights. We thus render a significant contribution towards delivering TUI Group’s “Better Holidays, Better World” sustainability strategy, aimed at reducing the ecological footprint and promoting people and regions in the destinations”, said Roland Keppler, CEO TUI fly.

Numerous measures have also been launched on the ground to ensure environmentally-friendly operations. In this context, TUI fly has now launched charging stations for electric vehicles at the employees’ car park at the head office – in cooperation with the energy utility Enercity. “In order to ease the start into e-mobility for our employees, they can charge their electric cars free of charge at these stations. We will also convert our vehicle fleet.

To that end, we are currently exploring the launch of electric vehicles for aircraft maintenance at the apron,” said Roland Keppler. TUI fly’s environmental programme includes measures for 18 destinations. It ensures the continuous transformation to more environmentally friendly operations covering all business areas.

The new Boeing 737 MAX aircraft (above) launching in 2019 will contribute towards that goal. TUI Group already operates five aircraft of the latest generation of 737s. At 16 percent, they have even exceeded expectations regarding fuel and emissions savings. 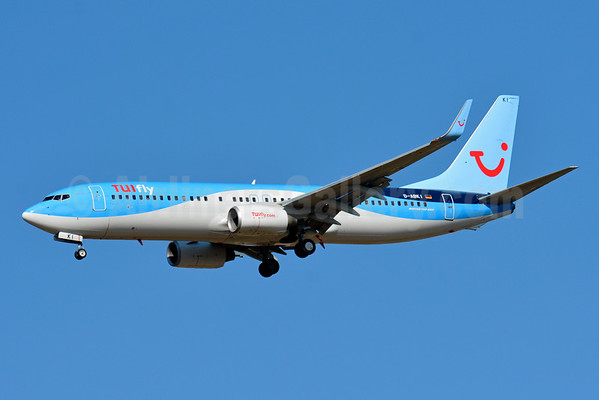 TUIfly will operate a Boeing 737-800 on the route from London Gatwick to St. Helena, via a short fuel stop in Banjul, Gambia. The two-class configuration will offer Economy and Economy Plus seating options.

The first dates for travel coincide with the Easter school holidays. They will of course be dependent on the airport at St. Helena being opened on schedule in February 2016.

Further flights are planned, timed to coincide with school holidays later in 2016. Atlantic Star will not be able to confirm the dates or release tickets for sale on these services until much nearer the time.

Boeing (Chicago, Seattle and Charleston) and TUI Group, one of the world’s largest integrated leisure travel companies, have finalized an order for one 787-9 Dreamliner with an option for one further 787-9. The order is valued at $257 million at current list prices. TUI Group also announced that it will substitute two unfilled orders for 787-8s for two 787-9s.

The European leisure group will operate a fleet of 13 787-8s from this summer and with today’s announcement will add three 787-9s to its fleet within the next three years.

The 787-9 complements and extends the 787 family. With the fuselage stretched by 6 meters (20 feet) over the 787-8, the 787-9 will fly up to 40 more passengers an additional 830 kilometers (450 nautical miles) with the same exceptional environmental performance – 20 percent less fuel use and 20 percent fewer emissions than the airplanes they replace.

There are six airlines in the TUI Group operating 144 medium and long-haul aircraft, including the 787. The airlines are TUIfly, Thomson Airways, TUIfly Nordic, Jetairfly, Corsair International and ArkeFly (Arke), serving more than 180 destinations around the world. Throughout its history, Boeing has delivered more than 165 airplanes to TUI Group airlines. As well as the orders for 787s, TUI Group also has ordered 60 737 MAXs.

In addition to TUI Group’s selection of the efficient 787 Dreamliner and 737 MAX, TUI Group is a partner on the Boeing ecoDemonstrator 757, which is currently testing new technologies to reduce airplane carbon emissions and noise.

Video: Flight review: Thomson Boeing 787-8 to Puerto Plata: This is a flight review of our Thomson Airways Boeing 787-8 Dreamliner flight to Puetro Plata (Gregorio Luperón International Airport) in the Dominican Republic in the Caribbean. We flew in economy class called “Dreamliner Class” on the Dreamliner. All footage of the journey is filmed from the economy class cabin. Our flight crew was mainly British with a Scandinavian stewardess on board too. Our Thomson Airways Dreamliner (Boeing 787-8) had registration number G-TUIA and was named “Living the Dream”. Our flight started at Copenhagen Airport in Denmark and the aircraft passengers where mainly Scandinavians (Swedish and Danish nationality). Our charter holiday trips where booked via Star Tour (name for TUI in Denmark) (Fritidsresor as TUI are called in Swedish) which is the same as TUI travel in the UK and Germany.

According to the Haribo website, there will be a new logojet named “Haribo Tropifrutti”. You can also win a free trip to New York via Newark Airport on this airplane together with Thomas Gottschalk (the most popular showmaster in Germany and currently the “face” of Haribo commercials), starting on April 25 which is also the first flight of this new logojet. The routing will be Cologne/Bonn – Keflavik – Newark.

The Haribo name is formed from Hans Riegel, Bonn.

This will be the third TUIfly Haribo logojet.

Above Copyright Photo: Ton Jochems/AirlinersGallery.com. The original Haribo design was introduced in 2008 on the pictured Boeing 737-8K5 D-AHFM (msn 27986) at Antalya.

Above Copyright Photo: Paul Bannwarth/AirlinersGallery.com. The second Haribo logojet, the pictured Haribo Goldbaren, was introduced in 2010 on the pictured Boeing 737-8K5 D-ATUD (msn 34585) landing at EuroAirport.

Video by Samuel Passos. Published on October 22, 2014. His description:

The island of Madeira, was buffeted by a cold front, a storm that lasted several days, from Thursday until Monday night, many flights were cancelled or diverted for the nearest airports.

TUIfly‘s (Hannover) parent, TUI AG (TUI Group) wants to cut costs at the German airline subsidiary by 65 million euros ($88.9 million) each year by cutting back on free services for passengers and lowering staff costs according to the daily Sueddeutsche Zeitung and this report by Reuters.

The new cost savings program is called “Max Thrust”. TUIfly will expand the fleet by four new aircraft for medium-haul flights and two planes for long-haul operations according to the report.

Tuifly plans to divide its cabin into three classes from May and stop offering free newspapers, inflight entertainment and blankets according to the report.

In another report by Romania-Insider.com, TUIfly is also considering moving 350 maintenance jobs to Romania in order to reduce costs.

TUIfly (TUIfly.com) (Hannover) will launch new long-haul leisure routes from Hamburg in November to the Caribbean. According to Airline Route, twice-weekly flights will be started to Barbados on November 22, Cancun on November 2, La Romana on November 29 and Punta Cana on November 1. The four new routes will be flown by TUI partner airline Arkefly (Amsterdam) Boeing 767-300s.

Boeing (Chicago) and TUI Travel PLC (London) announced a commitment today for 60 737 MAX airplanes, valued at $6.09 billion at list prices. The commitment by one of the world’s leading leisure travel groups includes 737 MAX 8s and 9s. Boeing looks forward to working with TUI Travel to finalize the details, at which time the order will be posted as a firm order to the Boeing Orders and Deliveries website.

“A major part of TUI Travel’s strategy is to provide our customers with unique holiday experiences that they can only get from us,” said Peter Long, Chief Executive, TUI Travel. “This multi-billion pound investment in the Boeing 737 MAX – representing the future generation of more fuel-efficient aircraft for our short and medium-haul programs – will be a further driver in delivering this.”

Top Copyright Photo: Rob Skinkis/AirlinersGallery.com. The new aircraft will replace the current generation of Boeing 737-800s. Thomson Airways’ 737-8K5 WL G-TAWK (msn 28836) is pictured at Manchester in the new TUI colors (please click on the photo for the full-size view).

TUIfly (TUIfly.com) (Hannover) has always embraced the use of logojets as a way to increase revenue.

The latest logojet has just been painted at Dublin. The pictured Boeing 737-8K5 D-AHFZ (msn 30983) (above) is now promoting the CEWE Photobooks (Mein CEWE Fotobuch) (CEWE.de). The German company specializes in photo products including photobooks.

TUIfly (TUIfly.com) (Hannover) introduced this month this special logojet to help celebrate 100 years (1912-2012) of “Baren Marke” (Bear Brand) of milk products in Germany. The bear became the symbol of the brand due to its Canton of Bern (Switzerland) roots developed by hotelier Cesar Ritz. “Baren Marke” is one of most well known product brands in Germany.

Bottom Copyright Photo: Gunter Mayer. A close-up of the logo.