The Board of Directors of Icelandair Group has decided to update the fleet policies of the subsidiaries Icelandair and Air Iceland.

The airline’s operations will be simplified and optimised as number of aircraft decrease and synergies will increase as all aircraft will be from the same manufacturer. As the Q400 is faster and has a longer range, 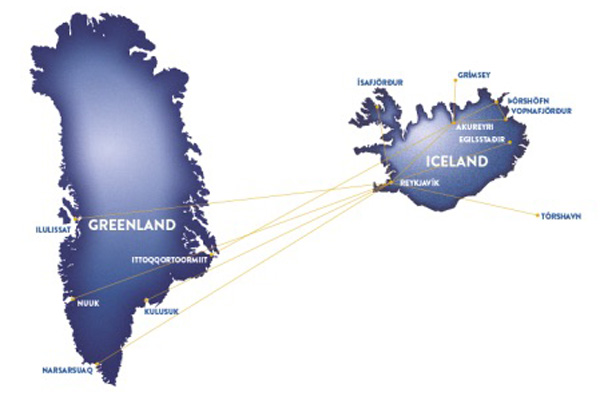 Air Iceland sees opportunities in new markets. The company will be better equipped to service the domestic market as the aircraft are larger and travel time will be shorter. The airline aims to increase the number of foreign tourists on board its aircraft going forward.

It has been decided that they will be replaced with two Boeing 767-300 aircraft that take 260 passengers that will be added to the route network as of the spring of 2016. Larger aircraft are more feasible due to high load factors on many routes all year round and limited number of landing slots on certain airports. The increase of the fleet in the last few years has made it more economical to have more than one size of aircraft in the fleet. The Boeing 767 aircraft is similar to the 757 in terms of maintenance and crew training and the airline has experience in operating that type.

Above Copyright Photo: Daniel White – Bruce Drum Collection. Icelandair is very familiar with the Boeing 767-300 as subsidiary Loftleidir Icelandic has been a past operator of the type. Boeing 767-3Y0 ER TF-FIA (msn 24953) taxies at Sanford (SFB).

Icelandair Group’s subsidiary, Loftleidir Icelandic, has operated 767 aircraft in leasing projects that have been maintained by Icelandair. The aircraft has longer range than the 757 which will create new opportunities for the route network.

It has not been decided whether the new aircraft will be purchased or leased.

Bjorgolfur Johannsson, President and CEO of Icelandair Group: “Operating one type of aircraft has been very economical for Icelandair but when the route network and the fleet reaches a certain size it becomes more feasible to have a broader range of aircraft in the fleet. High load factors all year round and limited number of landing slots on certain airports also support this decision. In terms of Air Iceland a simpler and more economical fleet will make the operations better as crew training will be simpler.

We foresee further growth opportunities in the coming years with these changes to the fleet policy for passenger aircraft. Both the Boeing 767 and Q400 aircraft can service markets that the current fleet cannot, which will enable us to go into new markets and connect them to the current route network.” 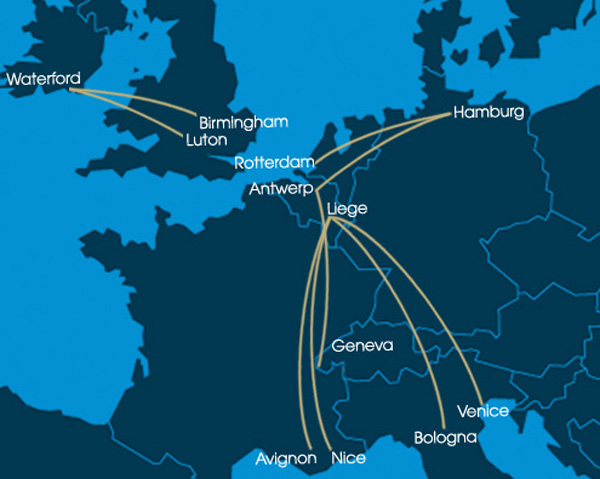 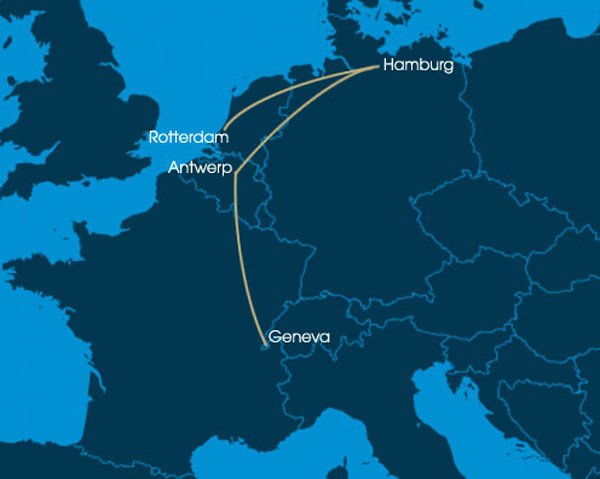 Braathens Regional (formerly Golden Air) holds the actual AOC and operates ATR 72-500s and SAAB 2000s under the Sverigeflyg brand. The group flies to Sundsvall in the north and Ängelholm/Helsingborg in the south of Sweden (see below). 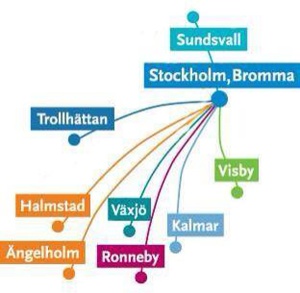 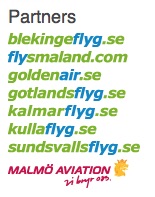 Some of these marketing names do not operate any aircraft.

Braathens Regional, Malmö Aviation and Sverigeflyg are all part of the Braathens Aviation group of companies.

This group of airlines will unite in 2015 under a single new brand which has not yet been determined or announced. 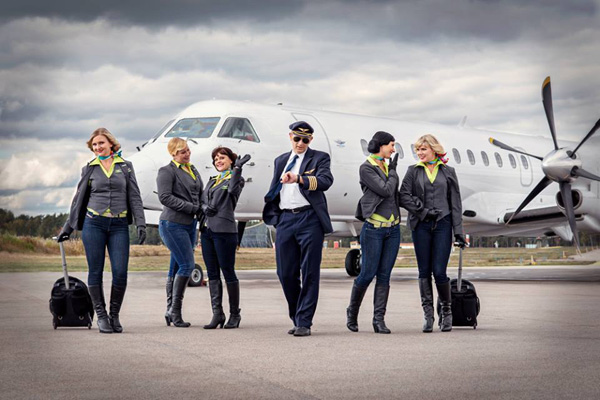 The company issued this statement (translated from Swedish):

Now it’s time to take the next step, and together with its sister company, Malmö Aviation, we will challenge throughout Sweden as a domestic airline with a Bromma Airport hub.

Braathens Aviation is a corporate group owned by Braganza AS. Braganza is a privately held investment company based in Oslo and is owned by Per G. Braathen and his immediate family.

Top Copyright Photo: Stefan Sjogren/AirlinersGallery.com (all others images by the group). Operated in the past, Fokker F.27 Mk. 050 (Fokker 50) SE-LEC (msn 20112) of Skyways Express arrives in Stockholm (Arlanda) in Sverigeflyg colors.

VLM Airlines (Antwerp) is getting a new chance to thrive. The company has announced its management team is acquiring the airline from Romscope and Intro Aviation. The following announcement was issued:

Today (October 28) Intro Aviation, majority shareholder of Romscope, has announced together with VLM Airlines that Romscope has sold VLM Airlines to the management of VLM Airlines with formalities of the transaction to be completed by the first week in November. As a truly independent airline, VLM Airlines will continue to offer ACMI and Charter services, but will also be offering scheduled services again in the near future.

VLM Airlines – which started in 1993 with its inaugural Antwerp-London City Airport route – over the years has become one of the most successful airlines in the charter business based at Antwerp International Airport. With its Fokker 50 fleet VLM Airlines focuses on meeting the needs of the European charter market including ACMI/Wet Lease contracts and charter operations for tour operators, travel agents, music & film, special events, incentives, sports teams, government & military, NGO’s and emergency support.

“We received an offer from the management of VLM Airlines that we felt we could not refuse.” said Peter Oncken, Managing Director at Intro Aviation. “We are happy to see VLM now to develop as a wholly independent airline in the ownership of a management which is dedicated to VLM”.

“We strongly believe in VLM Airlines as a truly independent airline,” commented Arthur White, CEO and majority shareholder of VLM Airlines. “As an independent airline we will keep offering ACMI & Charter services, but we will also start offering scheduled services in the near future. We are already studying a number of possible new routes from Antwerp International Airport. We will communicate this as soon as the deals have been concluded.”

The history of VLM Airlines:

From a low key beginning in 1993 with its inaugural Antwerp – London City Airport route, to the time of its sale in 2008 to Air France – KLM, VLM Airlines had become Belgium’s most commercially succesful airline. With ten years of consecutive profit, a record never beaten in Belgian aviation history, and a route network that stretched from Amsterdam, Antwerp, Rotterdam, and Luxembourg to London, Manchester, and Jersey, the airline at its peak was operating over 500 flights a week from London City Airport making it the No.1 airline operating from the airport.

During this period VLM also won many awards, among them the highly prestigious Regional Airline of the Year.

In 2008 the airline was acquired by Air France-KLM via Cityjet and VLM’s fleet was re-liveried in Cityjet colors. By 2010 the combined airline was carrying over 1 million passengers a year.

Copyright Photo: Ton Jochems/AirlinersGallery.com. With the new ownership group, VLM is likely to come up with another new color scheme or revert back to this colorful 2004 livery seen on Fokker F.27 Mk. 050 (Fokker 50) OO-VLX (msn 20177) at Rotterdam.

CityJet (Dublin) on October 26 will drop all service to Cambridge where it operates Fokker 50 scheduled flights to Amsterdam and Dublin according to Airline Route.

In April 2014 CityJet announced it was adding two routes from Cambridge International Airport to both Dublin and Amsterdam starting on May 12.

In other news, the Ospreys Rugby team and the airline have announced details of a new agreement that sees CityJet confirmed as official airline partner of the team in the region.

The new partnership will see the Ospreys travelling from Cardiff Airport on scheduled CityJet flights to Scotland and Paris this season, as well as taking advantage of charter flights to selected non-scheduled destinations throughout the year.

As part of the deal, CityJet’s logo will be featured on the right leg of the Ospreys shorts this season, making its first appearance when the region hosts Edinburgh at the Liberty Stadium.

CityJet started operating at Cardiff Airport in January 2014 and marked the occasion with a match day sponsorship of the PRO12 Welsh derby between the Ospreys and Cardiff Blues at the Liberty Stadium earlier this year.

CityJet (Dublin) has announced it will be adding two more routes to its network this year, with flights launching from Cambridge International Airport to Dublin and Amsterdam.

CityJet already launched four new routes out of Cardiff Airport this year, with routes to Paris-Orly and Glasgow starting in January, followed by the Edinburgh route which launched on March 30 and Jersey on April 17.

In other news, Intro Aviation completed its acquisition of CityJet and VLM Airlines on April 30, 2014. One change being dictated by the new owner is VLM will operate charter flights under its own name.

Copyright Photo: Paul Bannwarth/AirlinersGallery.com. The VLM Airlines Fokker 50s are currently operated under the CityJet brand but this may change under the new owners. Fokker F.27 Mk. 050 OO-VLZ (msn 20264) taxies at Nantes.

Minoan Air (Heraklion) will end all scheduled passenger services from Oxford, England on August 4 per Airline Route. This will leave Oxford without scheduled flights.

The Greek carrier commenced scheduled passenger services from Oxford to Edinburgh on March 4, 2013 and to Dublin two days later. 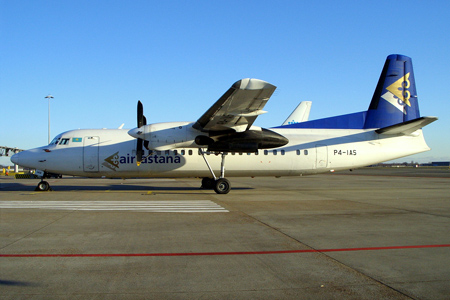 Air Astana continues to phase out the fleet of Fokker 50 turboprops, with the last two aircraft scheduled to be returned to the lessor in January 2013. The original fleet of six aircraft will be fully replaced by new generation Embraer E-190 jet airliners by mid 2013.

As a result of the Fokker 50 being withdrawn from service, Air Astana ceased operating Astana to Uralsk, Astana to and Atyrau to Uralsk services on December 1, 2012. The airports at Uralsk and Semey do not meet the international safety and equipment standards required to support Embraer E-190 jet operations. The resumption of flights to Uralsk and Semey will only be possible after a major upgrade of airports to jet standard.

“Modernizing the fleet is a strategic priority of Air Astana, with new generation Embraer E-190s having started replacing Fokker 50 turboprops on the short-haul routes over the past 18 months. The new aircraft offer our passengers more comfort and time-saving convenience to destinations Kazakhstan, Central Asia, Russia and the Caucasus”, said Peter Foster, President of Air Astana. “Air Astana regrets any inconvenience caused to passengers caused by the withdraw of these turboprop services, but safety is our number one priority”. 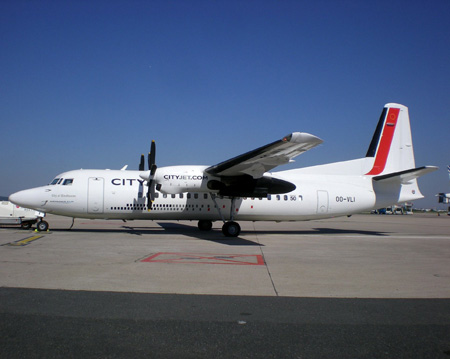 Copyright Photo: Pepscl. OO-VLI (msn 20226) was the last to be repainted. The airliner waits for its passengers at Paris (Orly).