JetBlue will serve the route with its 150-seat Airbus A320 aircraft.

Dynamic will operate its service between Fort Lauderdale/Hollywood and Caracas with a Boeing 767-300 ER aircraft. The airline is retrofitting its aircraft interior to enhance the premium experience on international flights.

Southwest Airlines (Dallas) has issued its 2014 One Report on the performance of the airline during 2014 including the integration of AirTran Airways:

On the heels of the airline’s Annual Meeting of Shareholders and announcement of expanded international service, Southwest Airlines® released its sixth annual, award-winning integrated report, found at southwestonereport.com. Southwest Airlines Chairman, President, and CEO Gary Kelly (above and below) shared his thoughts on the 2014 One Report and the carrier’s successful year on his LinkedIn Influencer page.

Kelly said, “I am immensely proud to say that 2014 will go down as one of the most monumental years in Southwest’s history, chock-full of major milestones and historic events—a banner year that we started planning for in 2010 when we laid out our five-year strategic plan. In short, 2014 was epic!

“It marks the end of one era and the dawn of another as the restrictions of the Wright Amendment were lifted*, allowing us to offer additional nonstop service from our home in Dallas. Of equal significance, we spread our wings into international territory and expanded our presence in markets that were once inaccessible to us, like New York City and Washington, D.C.

“We continued our commitment to efficient operations by signing an agreement to purchase low-carbon renewable jet fuel and remained on track with our fleet modernization efforts. I suppose it is only fitting that 2014 culminated with the completion of the AirTran Airways integration, which has been arguably the biggest project in our Company’s history.

“In celebration of all these exciting changes, we introduced a bold, new look with a new livery and logo (below).

The new look is centered around a heart, which serves as our foundation and symbolizes our commitment to remain true to our Core Values and low-fare philosophy as we seek to spread our Hospitality and Reliability to the rest of the world, because without a Heart, it’s just a machine. We accomplished all of this and more in 2014 while returning significant value to our Shareholders, surpassing our financial target of at least 15 percent pre-tax return on invested capital, excluding special items (ROIC); maintaining a job-secure environment for our People; spreading our Hospitality to our communities; and achieving our 42nd consecutive year of profitability—a record that is unmatched in the U.S. airline industry. Further, our common stock (LUV) was the top performer of the S&P 500. Indeed, 2014 was proof positive of our ongoing commitment to the triple bottom line.”

The carrier’s triple bottom line approach takes into account Southwest’s Performance and productivity, the importance of its People and the communities it serves, and its commitment to efficiency and the Planet. The 2014 One Report also features the major headlines of the year, including the launch of international service, the repeal of the Wright Amendment, the integration of AirTran Airways, the airline’s innovative LUVSeat upcycling Program, and the opening of a brand new LEED® (Leadership in Energy and Environmental Design) Silver-certified Training and Operational Support facility in Dallas.

Key highlights that can be found in the 2014 One Report include:

Reported record net income of $1.1 billion
Recognized as the top stock performer of the S&P 500 with a 125 percent increase
Returned $1.1 billion to Shareholders through repurchases of $955 million of common stock (33 million shares) and payment of $139 million in dividends
Reduced long-term debt and capital lease obligations by $261 million, net of debt issuance Completed the integration of AirTran Airways, achieving net pre-tax synergies of approximately $500 million (excluding acquisition and integration expenses)

Transitioned AirTran Airways Employees into Southwest, creating one Family
Allocated the largest total dollar amount ever to the Company’s ProfitSharing Plan
Introduced a multi-year program, Heart of the Community, as part of Southwest’s community outreach in placemaking
In 2014, Southwest donated more than $20 million in corporate monetary, in-kind, and ticket donations to the communities the carrier serves

Reached 26 percent improvement in jet fuel efficiency on revenue ton miles per gallon basis compared with 2005
Decreased absolute greenhouse gas emissions for the second year in a row due to continued improvements in fuel efficiency
Continued renewable energy commitments for a total of more than 50 million kilowatt-hours of renewable energy in 2013 and 2014
Ranked first among the four largest U.S. domestic passenger airlines and fourth overall for in-service fuel efficiency, according to the International Council on Clean Transportation (ICCT) report

Based on the Company’s outstanding year in 2014, the airline has again been named to Corporate Responsibility Magazine’s 100 Best Corporate Citizens List for its commitment to Employees and the communities in which they work and live. Southwest Airlines was named in the top 25 and the only commercial airline to make Corporate Responsibility Magazine’s List, with especially high scores in the following categories:

Southwest’s strong performance in these categories underscores the airline’s commitment to a triple bottom line of Performance, People, and Planet.

* Restrictions still apply with respect to destinations beyond the 50 United States or District of Columbia.

Video above: CEO Gary Kelly introduces the 2014 One Report. 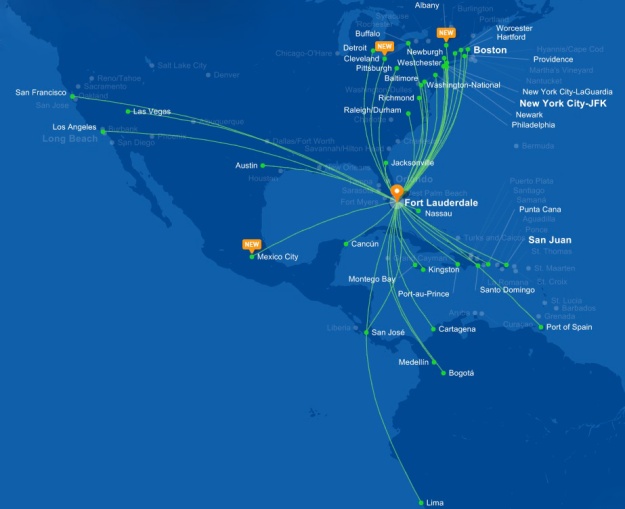 JetBlue Airways (New York) and Silver Airways (Fort Lauderdale/Hollywood) have announced a codeshare partnership that gives customers of both airlines access to new destinations, when connecting on a JetBlue flight. The majority of transfer opportunities will be in JetBlue’s focus cities Orlando (MCO) and Fort Lauderdale-Hollywood (FLL). Later this year, the partnership will expand to include 13 Silver Airways routes from Florida to The Bahamas, subject to receipt of regulatory approvals.

Under the agreement, customers will enjoy booking a single ticket and seamless baggage transfers when flying on a JetBlue codeshare flight operated by Silver Airways, and members of JetBlue’s frequent flyer program, TrueBlue, will earn points on all codeshare flights. Flights are now available for purchase on JetBlue.com in select markets.

The JetBlue ‘B6’ designator code will initially be placed on 14 Silver Airways routes, helping JetBlue customers get to destinations across Florida on one itinerary including:

The agreement gives customers the opportunity to connect from seven airports across Florida to JetBlue’s continuously growing network in both Fort Lauderdale-Hollywood and Orlando, reaching final destinations throughout the U.S., Latin America and the Caribbean.

JetBlue is the largest airline from Fort Lauderdale-Hollywood, with more than 70 daily flights to 36 cities in 10 countries, including Colombia, Costa Rica, Dominican Republic, Jamaica, Haiti, Mexico and Peru.

The two airlines have successfully cooperated on an interline basis since 2013. This marks JetBlue’s thirteenth announced codeshare agreement.

Baltimore/Washington is one of several new destinations JetBlue will launch from Fort Lauderdale-Hollywood this year. On April 30, the airline will launch nonstop routes to Cleveland Hopkins International Airport (CLE) and Detroit Metropolitan Wayne County Airport (DTW). With these additional routes, JetBlue will serve 36 cities across the U.S., Caribbean and Latin America on a nonstop basis from its South Florida focus city.

Spirit Airlines (Fort Lauderdale/Hollywood) continues to make money under its ultra low-fare strategy. For the fourth quarter (up 43%) and the full year (up 33%), profits soar. The airline issued this statement:

Spirit ended 2014 with an unrestricted cash and cash equivalents balance of $632.8 million.
Spirit’s return on invested capital (before taxes and excluding special items) for the twelve months ended December 31, 2014 was 30.1 percent.

Spirit reported fourth quarter 2014 cost per available seat mile (ASM) excluding special items and fuel (“Adjusted CASM ex-fuel”)3 of 5.61 cents, a decrease of 2.9 percent compared to the same period last year driven in part by lower distribution expense, maintenance expense, and aircraft rent per ASM. Distribution expense per ASM in the fourth quarter 2014 was lower compared to the same period last year primarily due to a one-time litigation settlement gain of approximately $2.9 million and a larger percentage of tickets being booked directly through spirit.com, the Company’s lowest cost distribution channel. The decrease in maintenance expense per ASM year over year was driven by an expense reversal in the fourth quarter 2014 associated with an insurance claim, along with a one-time $750,000 insurance deductible expense in the fourth quarter 2013. The decrease in aircraft rent per ASM was driven by a change in the mix of leased (rent recorded under aircraft rent) and purchased (amortization recorded under depreciation and amortization) aircraft.

Copyright Photo: Brian McDonough/AirlinersGallery.com. In the fourth quarter 2014, Spirit took delivery of seven new Airbus A320 aircraft, ending the year with 65 aircraft in its fleet. In addition, during 2014, the low fare carrier went to this highly visible “Home of the Bare Fare’ canary yellow color scheme. Airbus A319-132 N502NK (msn 2433) lands at the Fort Lauderdale-Hollywood International Airport base which now enjoys two parallel jet runways.