Flydubai (marketed as flydubai) (subsidiary of Emirates) (Dubai) has announced the launch of flights to Ahwaz, Hamadan, Esfahan, Shiraz and Tabriz in Iran. The announcement will see flydubai’s Iranian network grow to seven points, adding to the launch of flights to Tehran and Mashhad in 2014. Flights to Shiraz, Esfahan and Ahwaz will commence on March 8, 11 and 14 respectively. Hamadan and Tabriz will join the flydubai network on March 16.

Flydubai (Dubai) flight FZ 215 from Dubai to Baghdad, Iraq was shot at last night (January 26) while on approach to Baghdad International Airport with 154 passengers and crew members on board. The Boeing 737-800 was hit by three or four small arms bullets. As a result Air Arabia, Emirates and Etihad Airways have suspended operations to Baghdad.

Flydubai (Dubai) has announced the addition of three new routes to its growing network. Flights to Hargeisa (Somaliland), Chennai (India), and Nejran (Saudi Arabia) will commence in the first quarter of 2015, further expanding the carrier’s footprint to 89 destinations in 46 countries.

From March 5, 2015, Flydubai will become the first carrier to operate to Hargeisa, Somaliland from Dubai with four weekly flights. Flydubai has expanded its network in Africa in 2014 to 13 points served by 60 weekly flights.

Nejran will be added on January 10, 2015 with four weekly flights followed by Chennai on March 31, 2015 with three flights a week.

Flydubai (Dubai) has announced the launch of flights to Dar es Salaam, Zanzibar and Kilimanjaro in Tanzania. Flights to the East African country will commence in October, expanding the airline’s network in Africa to 12 destinations.

Previously Flydubai’s inaugural flight to Almaty landed at Almaty International Airport on September 16 and was met too by a traditional water cannon salute. This marked the start of the airline’s operations to Kazakhstan.

Flydubai (Dubai) has announced the addition of three new east African routes, bringing the total number of destinations in the carrier’s network to 80. With the launch of flights in September 2014 to Bujumbura in Burundi, Entebbe in Uganda and Kigali in Rwanda, Flydubai will fly to nine destinations in Africa.

In addition to operating between Dubai and these three new cities, Flydubai has obtained the rights to carry passengers between Uganda and Burundi.

Rwanda and Burundi are home to some of the most biodiverse places. Filled with numerous volcanoes, nature reserves and the second deepest lake in the world, the two countries also have one third of the world’s remaining Mountain Gorillas and one third of Africa’s bird species. While tourism is the largest contributor to Rwanda and Burundi’s economies, Uganda is considered one of Africa’s most progressive economies and is emerging as one of the leading commercial centres within Africa.

Flydubai will operate seven flights a week between Entebbe and Dubai starting from September 28, 2014.

Flydubai will operate two flights a week between Bujumbura and Dubai via Entebbe starting from September 30, 2014.

Flydubai will operate two flights a week between Entebbe and Bujumbura starting from September 30, 2014.

Flydubai will operate three flights a week between Kigali and Dubai via Entebbe starting from September 27, 2014.

Flydubai (Dubai) today announced the launch of flights to Tehran and Mashhad, the carrier’s first two destinations in Iran.

Flights to Tehran will begin on August 11 and Mashhad on August 10. Flydubai will serve Iran with four flights a week, providing passengers with greater convenience when travelling between the United Arab Emirates and Iran. The carrier will be looking at expanding its network in the market as it continues to strengthen the trade and travel links from Dubai to the region.

The carrier, which took delivery of three new Next-Generation Boeing 737-800s in July (one is pictured above), has grown its fleet to 39 aircraft with more than 100 new Boeing aircraft on order.

Flydubai commenced its new services to Kandahar in July and Aden at the beginning of August. The airline is also set to commence flights to Moscow and Kazakhstan in September, Mumbai in October and to Sarajevo and Zagreb in December.

Bottom Copyright Photo: Flydubai. According to the carrier, “Orange represents the warmth of the climate and the people and blue represents the sparkling clear sea and endless blue skies. The free flowing bands on the tail are reflective of the ever-changing coastline of Dubai”. 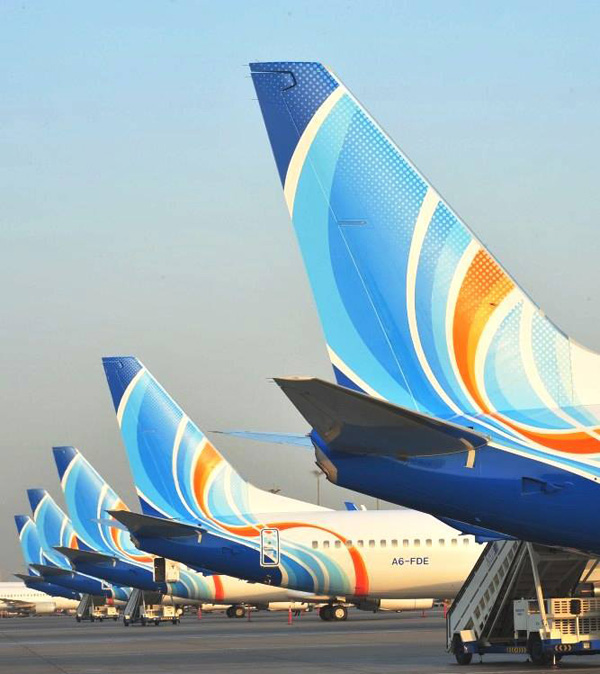 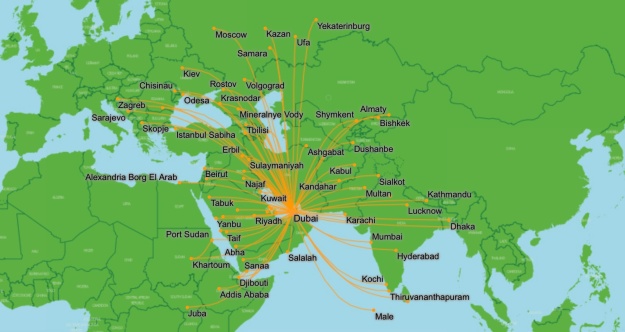 Flydubai (Dubai) has announced that it will launch a three times weekly service to Aden and a twice weekly service to Kandahar, starting on August 1 and July 25, 2014 respectively. These new route launches bring the airline’s network to 68 destinations.
Flydubai will become the first UAE-based carrier to fly directly to both Aden in Yemen and Kandahar in Afghanistan. The airline first began operations to Sana’a, the capital of Yemen, in 2012 and Kabul, the Afghan capital, in 2010.

Aden is the commercial capital of Yemen and its deep and naturally protected seaport remains a key driver of the country’s economy. Due to its strategic geographic location, Aden Free Zone has established itself as a regional logistics and manufacturing hub which has helped strengthen economic and social development in the seaport city.

Flydubai will operate three flights per week to Aden, one of which will be via Djibouti. This new service will increase flights to Djibouti to six a week. In addition, flights are available for sale between Aden and Djibouti.

Located in southern Afghanistan, Kandahar is the capital of Kandahar Province with an estimated population of 500,000. The city is a major trading center for sheep, wool, cotton, silk, felt, grains and fresh and dried fruit.

Flydubai (Dubai) has announced the launch of daily flights to Moscow (the specific airport was not mentioned), to start in September 2014, during the Moscow International Travel & Tourism Exhibition (MITT).

Flydubai was launched in 2009 and entered the Russian market in its second year of operation. The airline started direct flights to Dubai from Samara and Yekaterinburg in October 2010, followed by Kazan and Ufa in 2011. Last year, the airline doubled its network in the country with four new destinations: Krasnodar, Mineralnye Vody, Rostov-on-Don and Volgograd.

Based in Terminal 2 at Dubai International Airport, Flydubai flies to 66 destinations in 35 countries. Last year, Flydubai carried 6.82 million passengers. The airline has reported two consecutive years of profitability, which included a 47 per cent increase in profit in 2013 over the previous year. It currently operates a fleet of 36 new Boeing 737-800 aircraft and recently placed an $8.8 billion order for 86 new Boeing aircraft before having received delivery of all the aircraft from its order for 50 Boeing aircraft in 2008.

The order was first announced as a commitment at the 2013 Dubai Airshow, making it Boeing’s largest single-aisle airplane order in the Middle East.

The 737 MAX incorporates the latest technology CFM International LEAP-1B engines to deliver the highest efficiency, reliability and passenger comfort in the single-aisle market. Airlines operating the 737 MAX will see a 14 percent fuel-use improvement over today’s most fuel-efficient single-aisle airplanes.

Development of the 737 MAX is on schedule with firm configuration of the airplane achieved in July 2013. First flight is scheduled in 2016 with deliveries to customers beginning in 2017. Already a market success, the 737 MAX has accumulated more than 1,700 orders to date and will have 8 percent per-seat lower operating costs than the future competition.