On March 29, 2015, at approximately 1240 a.m., Air Canada flight ACA 624, an Airbus A320, on a scheduled flight from Toronto’s Lester B. Pearson International Airport, Ontario (YYZ), to Halifax, Nova Scotia (YHZ), collided with terrain approximately 1100 feet from the threshold of Runway 05, eventually coming to rest about 1100 feet down the runway. There were 133 passengers and 5 crew members on board; all of whom exited the aircraft. Twenty-five people were taken to hospital for treatment of injuries.

The initial impact was significant and caused substantial damage to the aircraft. The main landing gear separated and the underside of the aircraft was heavily damaged (fuselage and wings). During this impact, the aircraft collided with a localizer antenna array – part of the instrument landing system – and became airborne again, travelling forward on Runway 05. There is an extensive debris field between the localizer antenna location and the threshold of the runway.

During the first day on site, Transportation Safety Board of Canada (TSB) investigators documented the wreckage, the impact marks and the debris field. The cockpit voice recorder (CVR) and the flight data recorder (FDR) were recovered from the aircraft and have been sent to the TSB Engineering Laboratory in Ottawa, Ontario.

The investigation team is led by the Investigator-in-Charge, Doug McEwen. Mr. McEwen has been an investigator with the TSB for 18 years. He is assisted in this investigation by experts in flight operations, air traffic services, weather, aircraft structures, aircraft systems, aircraft engines, and human performance.

Some of these experts come from within the TSB, but assistance is also being provided by the following organizations: Transport Canada (TC), NAV CANADA, the Royal Canadian Mounted Police, Airbus, and France’s Bureau d’Enquêtes et d’Analyses. This is a normal part of any investigation, as these experts play a key role in helping the team uncover and understand all of the underlying factors which may have contributed to the accident.

Although more analysis is required, this accident displays some of the characteristics of an approach-and-landing accidents which is on TSB’s Watchlist.

The investigation is ongoing and the next steps include the following:

Should the investigation team uncover safety deficiencies that present an immediate risk, they will be communicated without delay so they may be addressed quickly and the aviation system made safer.

The information posted is factual in nature and does not contain any analysis. Analysis of the accident and the Findings of the Board will be part of the final report. The investigation is ongoing.

The TSB is an independent agency that investigates marine, pipeline, railway and aviation transportation occurrences. Its sole aim is the advancement of transportation safety. It is not the function of the Board to assign fault or determine civil or criminal liability.

Air Canada provided this Update #3 on the accident:

Air Canada confirms that all but one of the passengers and crew admitted to area hospitals for observation and treatment have now been released.

“We at Air Canada are greatly relieved that no one was critically injured. Yet we fully appreciate this has been a very unsettling experience for our customers and their families, as well as our employees, and we are focused on caring for all those affected. We will also fully cooperate with the Transportation Safety Board as it begins an investigation to determine the cause,” said Klaus Goersch, Executive Vice President and Chief Operating Officer of Air Canada.

No further details are available at this time, however Air Canada will provide regular updates on Twitter and on its webite at aircanada.com as warranted.

Family members who seek information about passengers on Flight AC624 may telephone Air Canada at 1-800-961-7099.

Flight AC624, an Airbus A320 carrying 133 passengers and five crew, was involved in an incident upon landing at Halifax International Airport, Nova Scotia. The incident occurred at approximately 00:43 AT Sunday March 29 (23:43 ET March 28).

Top Photo: TSB. Airbus A320-211 C-FTJP (msn 214), while a probable insurance write off, is largely intact after the impact with terrain and allowed for the safe evacuation of the airliner.

In addition to nonstop flights to Houston, growth in Western Canada includes new daily non-stop flights from Calgary to Yellowknife and Terrace, BC, launching May 3, 2015. WestJet Encore service between Edmonton and Kamloops, BC, announced early last year, is set to begin on February 15, 2015.

In addition, WestJet has announced the largest increase in service from Halifax Stanfield International Airport since the airline first arrived in February 2003. This announcement, part of the 2015 summer schedule release, makes it official – WestJet Encore is now serving Canadians coast to coast.

The airline continues to bolster its presence in the Atlantic Provinces where the majority of route and frequency increases announced today take place. New nonstop daily service from Halifax to Gander and Deer Lake, Newfoundland and Sydney, Nova Scotia begins July 15, 2015, along with increased frequency between Halifax and Ottawa, Toronto and St. John’s, Newfoundland. Cities currently served from Halifax include Calgary, Edmonton, Hamilton, Ontario, and six U.S. and international destinations.

Haligonians will also help WestJet celebrate new service between their fair city and Glasgow, United Kingdom, beginning May 29, 2015. As the halfway point between Europe and the west coast of North America, Halifax is the perfect jumping-off point for a tour across the pond. 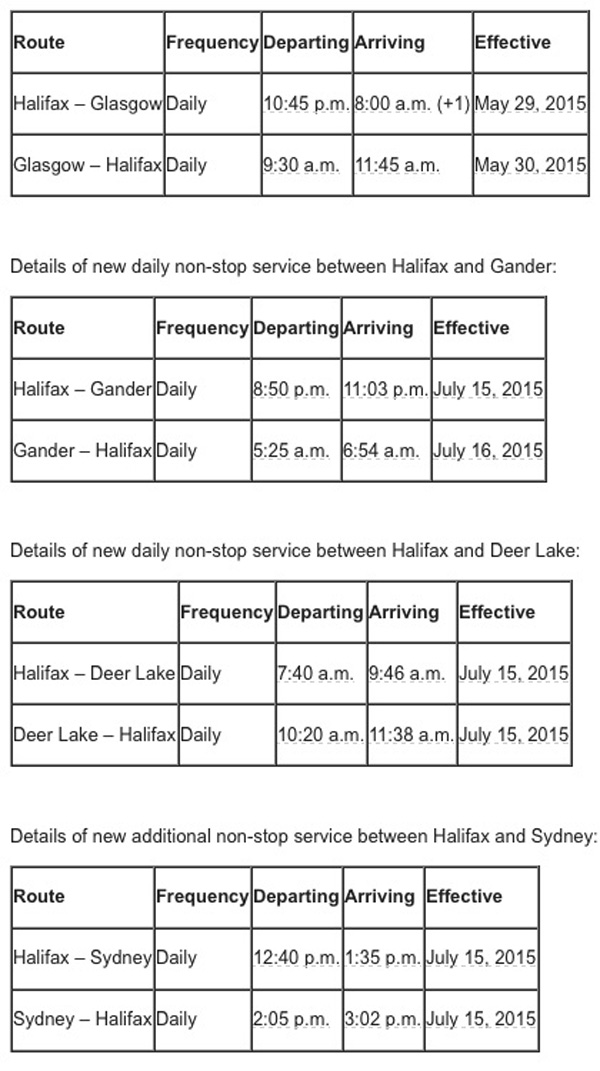 The flights will operate weekly between July 4 and August 29, 2014.

The schedule for the new routes is as follows:

All times specified are local and subject to government approval.

The flights will be carried out with a Boeing 737-700, configured in a two-class lay-out, with a capacity of 128 seats: 24 in Premium Economy class and 104 in Economy class.

Europe Airpost, a member of the international ASL Aviation Group, is one of the top French airlines. Europe Airpost is a unique airline with dual activities: passenger and freight.

Europe Airpost celebrated its 13th anniversary in 2013. The airline has around 600 employees and operates a fleet comprising 18 Boeing 737 aircraft. It annually transports 650,000 passengers and posts a turnover of 236 million euros.The airline reports quality of service standards among the highest in the market, with regularity rates of 100% and punctuality departure within 15 minutes rates of 95.4% for the passenger activity.

Copyright Photo: Ton Jochems/AirlinersGallery.com. Boeing 737-73V F-GZTC (msn 32414) holds short of the runway at Palma de Mallorca. Europe Airpost is an unique airline. The carrier operates mail and cargo flights for the French postal service (hence the name) during the night and scheduled and charter passenger flights for other airlines and tour operators during the day with its fleet of convertible Boeing 737-300s.