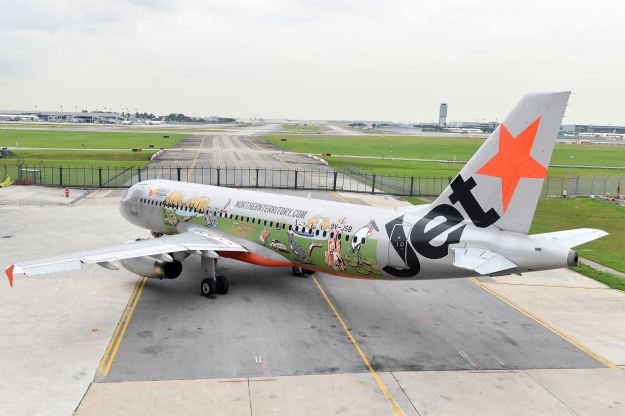 Jetstar Asia has partnered with Tourism Northern Territory to celebrate ten years of flying between Singapore and Darwin with a special livery on Airbus A320 9V-JSB depicting scenes from the Top-End.

In celebration of our 10th year of flying to Darwin, we’ve launched a commemorative livery, featuring the top icons of Australia’s Outback, Northern Territory!

Designed by Singaporean illustrator Ben Quek Made By Ben, this special livery is on our 9V-JSB A320, so look out for it as it flies around Asia and of course to Darwin.

“From vast deserts to lush wetlands, koalas to crocodiles – these are the contrasts I wanted to

capture in the design and colours in the livery,” said Mr. Qwek.

Jetstar Asia operates a daily service from Singapore to Darwin during peak periods. 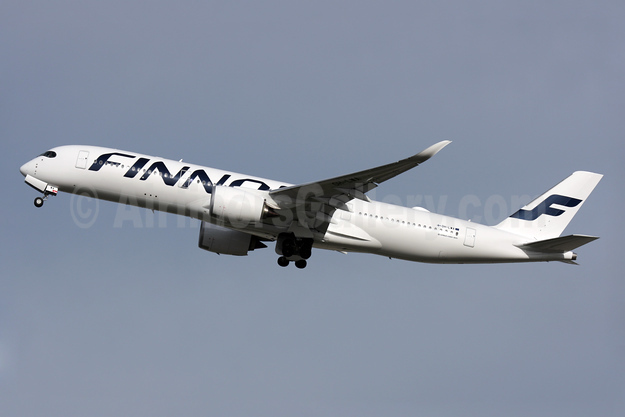 Jetstar Asia Airways (Singapore) has released this statement and photo about its business relationship with the TV show Asia’s Got Talent. As a result the airline is introducing this new promotional scheme on its Airbus A320-232 9V-JSA (msn 2316):

Jetstar is pleased to announce sponsorship of the very first season of the wildly popular talent competition — Asia’s Got Talent.

The first pan-regional format of the talent search program will see some of the region’s most aspiring artistes gather in Singapore to fight for the coveted winning title.

Jetstar’s network of 22 destinations across 13 countries in Asia Pacific will enable the region’s top talents to fly further to fulfill their dreams and aspirations.

To support these artistes in their pursuit of being Asia’s top talent, Jetstar will provide complimentary return airfares to those who are shortlisted from across Asia for the judges’ auditions up until the grand finale, which will be held in Singapore.

Each contestant may also invite a companion to support them in reaching for the stars. 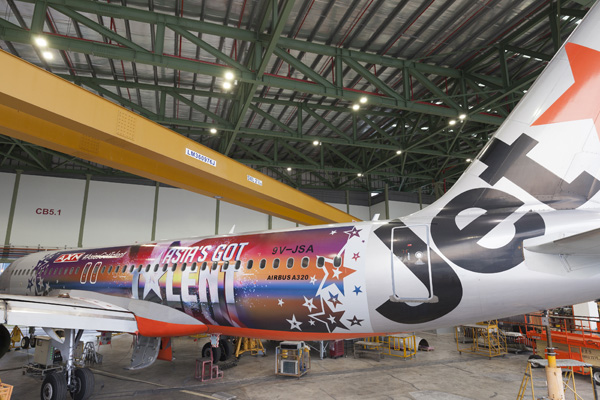 To celebrate the season premiere of Asia’s Got Talent, a Jetstar A320 will now sport a brand new look (above).

The livery is a first in Got Talent history.

The aircraft will take to the skies from February and will fly around the region to destinations in the Jetstar network for the next six months.

Video: The painting of the latest logojet:

Emirates (Dubai) and Jetstar Airways (Melbourne) have announced the expansion of their codeshare and frequent flyer relationship, to 30 routes across the Asia Pacific region providing more choice to Emirates customers.

From October 26, 2014*, Emirates will grow its codeshare on Jetstar to include Jetstar Airways services between Melbourne and Ayers Rock (Uluru), Christchurch to Wellington in New Zealand and three new destinations in south-east Asia from Jetstar Asia’s hub in Singapore.
The new codeshare services from Singapore will connect Emirates passengers to Penang in Malaysia, Yangon in Myanmar and Medan in Indonesia.

The additional destinations complement the current 25 routes announced in February this year.

All Emirates’ passengers on Jetstar flights will receive boarding passes on check-in at their first international departure point for connecting international service.

Since launching in 2004, Jetstar has grown from a small domestic carrier – with just 14 aircraft flying up and down the east coast of Australia – to become the fastest airline brand in Asia Pacific to grow its fleet to 100 aircraft.

Jetstar Group Chief Executive Officer Jayne Hrdlicka said this milestone was only possible because of the 400,000 passengers who choose to fly with the Jetstar Group each week.

To commemorate this milestone, Jetstar has applied a special 100th aircraft livery on its first Sharklet-equipped Airbus A320.

The livery features 132 people doing the Jetstar star jump including passengers and ambassadors from across Asia Pacific representing the five Jetstar branded airlines.

“The delivery of this new A320, with its remarkable wing-tip technology, reflects our on-going commitment to invest in modern aircraft and innovation to benefit our customers.

“The distinctive wing-tips bring about higher fuel efficiencies and help us to continue to deliver everyday low fares to our customers.”

The Jetstar Group now has three aircraft fitted with the fuel saving Sharklets – one each for Jetstar Asia, Jetstar Japan and now Jetstar Australia and New Zealand.

The Airbus A320-232 with the special 100th livery registration of VH-VFN (msn 5566) will be flown on major domestic routes and over the coming months and is expected to visit New Zealand, Singapore and Japan.

The Jetstar Group is made up of Jetstar Airways (subsidiary of the QANTAS Group) in Australia and New Zealand, Jetstar Asia in Singapore, Jetstar Pacific in Vietnam and Jetstar Japan in Japan.

Jetstar Asia Airways (Singapore) will extend the Singapore-Manila route to Osaka (Kansai) starting on March 25. The new route will be operated four days a week with Airbus A320s according to Airline Route. 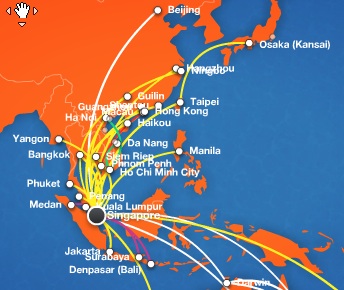 Jetstar Asia Airways (Jetstar.com) (Singapore) will drop the Singapore-Macau route on February 6 according to Airline Route.

Jetstar Asia Airways (Singapore) has signalled further Pan Asian growth with a major expansion of its Singapore hub with five additional Airbus A320s and two additional A330s and an extra 40 weekly flights by the end of 2011.

By the end of the year Jetstar will have 17 A320s and four A330s based in Singapore. This represents a growth in the Singapore services of almost 200 per cent since 2009.

By the end of this year, Jetstar will be operating more than 3,000 flights per week to more than 60 destinations, across 17 countries with a fleet of 86 aircraft.

Copyright Photo: Michael B. Ing. Please click on the photo for additional details.

Jetstar Airways (Melbourne) started the Melbourne-Singapore route on December 16 with Airbus A330-200 aircraft in association with the Jetstar Asia. Jetstar may base four Airbus A330s in SIN by the end of 2011, a direct low-cost challenge to Singapore airlines.

Read the full story from Bloomberg: 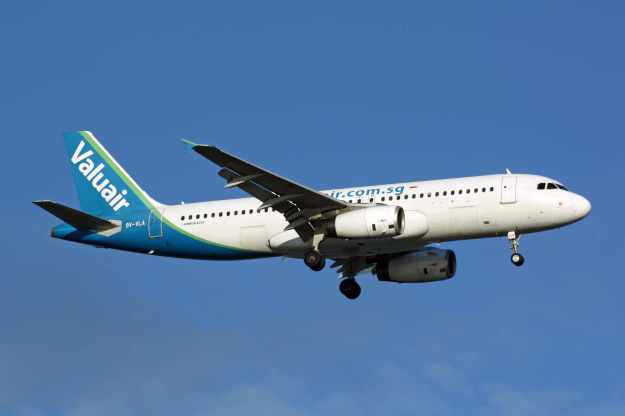