Jet Airways and Boeing today (April 4) announced a new order for 75 737 MAX airplanes as India’s premier international airline looks to the new and improved 737 jet to power its future growth.

Jet Airways announced its first order for 75 MAX airplanes in 2015 as part of a strategy to refresh its fleet with the most modern and environmentally progressive airplanes. The newest order adds 75 more MAXs to support the airline’s future expansion. Jet Airways is set to take direct delivery of its first MAX airplane later this year. 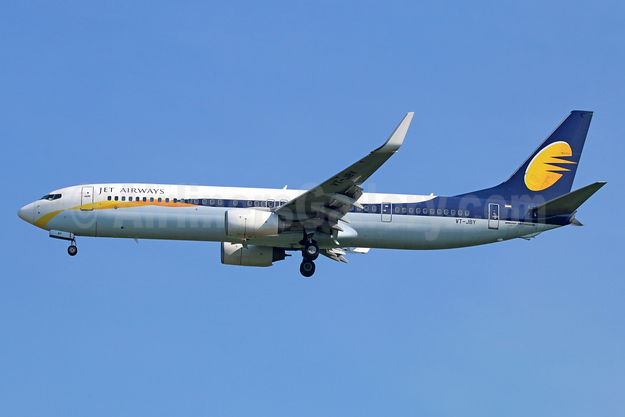 Jet Airways made this announcement:

Continuing its focus on growing its domestic presence, Jet Airways, India’s premier full-service international airline, will introduce 144 weekly flights in the first phase of its forthcoming summer schedule. The new schedule will feature a combination of nonstop services – several of them on unique routes being introduced for the first time in the industry, as well as direct, one-stop services between new city pairs in the airline’s existing pan India network, bolstering it further.

As part of the new schedule, Jet Airways will strengthen connectivity between the country’s capital and the North Eastern region via a bouquet of pioneering, nonstop services including thrice-a-week flights to Aizawl and Jorhat and four times-a-week flights to Silchar from New Delhi. The airline also commences four times-a-week nonstop service to Imphal from Delhi. Cementing its presence further in the young, urban metro city of Pune, the airline also launches new, nonstop services to Patna, Raipur and Chandigarh. Additionally, Jet Airways begins a daily, non-stop service for the very first time between Mumbai and Tiruchirappalli – Tamil Nadu’s famous temple city and a religious centre, aside from a new, direct service between Tiruchirappalli and Delhi.

The airline is also commencing direct, one-stop services between Mumbai and the North Eastern cities of Jorhat and Imphal, marking its return to the capital of Manipur. Imphal will also be connected with Pune with direct flights via Guwahati and Kolkata, enhancing access and connectivity between the North-East and its hubs in Mumbai and Delhi. In fact, Guwahati will play an instrumental role in facilitating this season’s connectivity, enabling non-stop daily flights also to Bagdogra, Imphal and Mumbai. The upcoming robust connectivity between the North East and India’s financial as well as political Capital is expected to provide a positive stimulus to the region’s economy, boosting tourism as well as development of business and trade, leading to growth enhancement of Cargo movement.

Among other network enhancements, summer 2018 will also see Jet Airways connect the holy city of Amritsar with non-stop and direct flights from its hubs in Mumbai and Bengaluru respectively for the first time. In fact, Bengaluru will witness addition of other new, non-stop flights that will connect it to the bustling cities of Indore and Patna, reinforcing the cities’ position as Jet Airways’ third domestic hub, after Mumbai and Delhi. Additionally, Jet Airways will also connect Patna with non-stop flights to Mumbai. 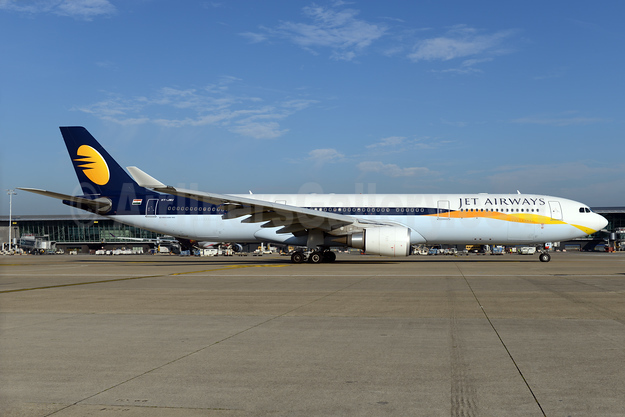 Jet Airways (Mumbai) and Boeing announced an order for 75 737 MAX 8 airplanes at the 2015 Dubai Airshow.

The announcement marks the largest order in Jet Airways’ history and supports the airline’s replacement strategy to have the most modern and environmentally progressive airplane fleet. The order, previously attributed to an unidentified customer, includes conversions of 25 Next-Generation 737s to 737 MAX 8s, as well as options and purchase rights for an additional 50 aircraft.

The 737 MAX incorporates the latest technology CFM International LEAP-1B engines, Advanced Technology winglets and other improvements to deliver the highest efficiency, reliability and passenger comfort in the single-aisle market.

According to the group, “Etihad Airways, Etihad Airport Services, Airberlin, Air Serbia, Air Seychelles, Alitalia and Jet Airways have together taken a new step forward in their strategic business development through this unique fund-raising initiative.”

“At a series of roadshow meetings, held in Abu Dhabi, Dubai and London, the shared vision and strategies of the airlines were laid out to financial institutions. These highlighted the growing network coordination and revenue development initiatives, coupled with joint procurement and business synergy projects, across the airlines.”

Allocation of the funds raised will be nearly 20 percent each to Etihad Airways, Etihad Airport Services, Airberlin and Alitalia; 16 percent to Jet Airways; and the remainder to Air Serbia and Air Seychelles.

The funds raised by the transaction will be used largely for capital expenditure and investment in fleet, as well as for refinancing, depending on each individual airline’s needs.

The transaction marks the first time that Etihad Airways and its partners have raised funds together. To date, Etihad Airways has already raised in excess of $11 billion (US) from more than 80 financial institutions, to help fund its expansion strategy.

The funds have been raised through a special purpose vehicle, EA Partners IBV. Goldman Sachs International, ADS Securities and Anoa Capital are acting as joint lead book-running managers for the offering.

Jet Airways (Mumbai) today (December 2) commenced the roll out of a full service product on all flights across its domestic network.

According to the airline, “Starting today, Jet Airways’ will offer guests a two class, full service product with a complimentary dining experience onboard all domestic flights. Apart from the enhanced service quality levels, the airline will offer easy convenient connections on its domestic network to over 51 destinations across India with over 450 daily domestic flights. Guests will also be able to access 22 international destinations on Jet Airways network and will also offer connectivity to over 135 international destinations across the world with its strategic alliance partner Etihad Airways.”

This also ends the JetKonnect operation.

Jet Airways (Mumbai) had a Mumbai-Dubai flight delayed by one and a half hours after the flight crew got into a heated argument in the cockpit before departure. The first officer left his position in the cockpit alleging the captain “manhandled” him according to this report by Mid-Day. The flight was delayed as managers attempted to find a replacement first officer.

Doha is currently linked with one flight each from Mumbai, Delhi and Kochi. The new flight on this high demand route will not only cater to the growing Indian expatriates but also boost tourism and trade between the two cities and will help in bringing in traffic to and from the Middle East.

With these new enhanced flights, Jet Airways will achieve the landmark milestone of becoming India’s first private airline to operate over 40 daily flights to multiple destinations in the Gulf. This includes daily departures to Abu Dhabi, Bahrain, Dubai, Doha, Kuwait, Sharjah, Muscat, Jeddah, Dammam and Riyadh, thus, making the airline the largest operator between India and the Gulf.

Due to popular demand, Jet Airways has added a second direct flight from Mumbai to Colombo. Jet Airways flight 9W 252 will depart Mumbai at 1805 and arrive into Colombo at 2035 (local time). The return flight 9W 251 will depart Colombo at 2135 (LT) and arrive Mumbai at 0015, providing onward connections to Dubai and Abu Dhabi in the Gulf, Bangkok, Singapore and Hong Kong in the Far East and to North America via Brussels and London Heathrow with direct and codeshare flights.

In addition, Jet Airways has introduced a third daily nonstop service from its international gateway in Mumbai to Bangkok. The new afternoon service will provide seamless connectivity to guests from the airlines domestic network. This would make Jet Airways’ the only Indian carrier to operate three flights a day from Mumbai to Bangkok’s International Suvarnabhumi Airport as well as providing on ward connections to Ho Chi Minh from Bangkok.

This new flight from Mumbai to Bangkok, offers a convenient afternoon service, flight 9W 060 which will depart Mumbai at 1255 (LT) and arrive at Bangkok at 1835 (LT). On return, flight 9W 061 which departs Bangkok at 0855 (LT) and arrives into Mumbai at 1155 (LT) daily. Jet Airways guests from Mumbai will now have the option of connecting to Ho Chi Minh city and to several destinations of their choice in ASEAN Region while they transit over Bangkok. This new flight is conveniently timed to connect guests travelling from Jet Airways domestic network to Bangkok and beyond to ASEAN points.

Copyright Photo: TMK Photography/AirlinersGallery.com. The pictured Boeing 737-8AL VT-JFT (msn 39066) was delivered on June 4, 2014 and passed through Toronto (Pearson) on its delivery routing.

Jet Airways (Mumbai) is getting out of the low-fare business and will concentrate on full service flights under its own brand. All JetKonnect-branded flights will end on November 30 and on the following day all flights will be operated under Jet Airways brand.

Jetlite was replaced and merged into Jet Airways’s JetKonnect brand on March 25, 2012.

From December 1, 2014 all existing JetKonnect flights will operate as full service flights under a single brand, Jet Airways.

All guests booking flights on or after September 15, 2014 for travel on or after December 1, 2014 will enjoy a full service experience onboard all Jet Airways and JetKonnect operated flights across our domestic network. This enhancement will involve complimentary meal service onboard all our flights for travel effective December 01, 2014. Consequently Sky Café, our Buy on Board service will be discontinued.

JetKonnect flies to 47 cities within India with over 430 daily flights with a mix of Boeing and ATR aircraft.