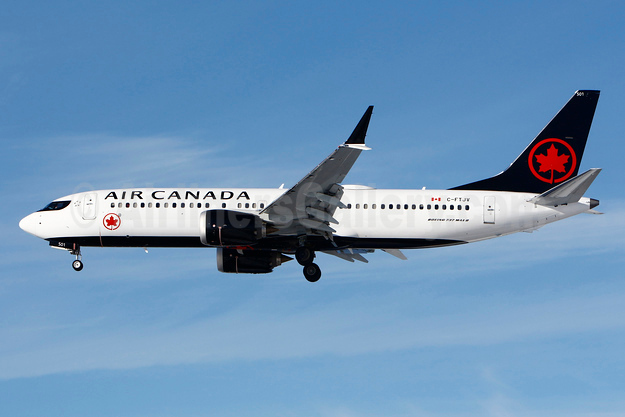 Air Canada (Montreal) is bringing its new Boeing 737-8 MAX 8 to California for the summer season. The new type is being assigned to the Los Angeles daily market from Toronto (Pearson) starting on May 1, 2018. The Toronto – San Francisco route will also be added starting on May 16, 2018 per Airline Route.

In addition, from February 1, 2018 the new Boeing will be operating domestically on the Toronto – Calgary, Toronto – Montreal and Toronto – Vancouver routes.

NewLeaf Travel Company Inc. has announced an expansion to its route map, with a new nonstop flight addition between Edmonton and Winnipeg. Flights can be booked anytime on the new YEG to YWG route, which will run on Thursdays and Sundays beginning August 21, 2016.

The new route expands NewLeaf Travel’s flight service out of Edmonton, which already runs direct flights from YEG to Hamilton, Kamloops and Abbotsford.

As an ultra‐low cost travel company, NewLeaf works with Flair Airlines to offer base fares that are significantly less than other Canadian carriers. It achieves this through cost‐saving measures such as operating out of smaller airports with lower landing fees; flying a simple point‐to‐point network with minimal time between flights; and offering customers à la carte purchase of options such as carry-on and checked baggage, priority boarding, and call centre assistance for a fee.

NewLeaf Travel Company Inc. is a privately-held Canadian company headquartered in Winnipeg, Manitoba that provides leisure travellers with low fares and travel options that are unbundled and transparent. See more at http://www.GoNewLeaf.ca

Flair Airlines Ltd. is a Canadian airline with operations based in Kelowna, Calgary and Hamilton.

The return westbound routing stops at Gander per Airline Route.

Air Canada (Montreal) today further expanded its global network with the announcement of new nonstop services to Lyon, France and London’s Gatwick Airport beginning in the summer of 2016.

Air Canada service between Montreal (Trudeau) and Lyon will begin on June 16, 2016 and operate up to five-times weekly with an Airbus A330-300 aircraft with 37 International Business Class lie-flat suites and 228 Economy class seats.

Air Canada rouge’s summer seasonal service betweenToronto and London-Gatwick will begin on May 19, 2016 and operate up to seven-times weekly with a Boeing 767-300 ER aircraft with 24 Premium rouge seats and 256 rouge seats.

In other news, Air Canada received confirmation by Unifor, representing the airline’s approximately 4,000 Customer Service and Sales Agents, that its members have ratified an agreement on a new collective agreement for five years.

The agreement has also been approved by the Air Canada Board of Directors.

WestJet (Calgary) on Friday (June 5) issued this statement about flight WE588 operating from Toronto (Pearson) to Montreal (Trudeau) which overran the runway on landing at Montreal:

Our primary concern is always for the safety and well-being of our guests and crew. All are reported safe at this time.

We offloaded guests shortly after with all guests exiting the aircraft via air stairs and then walked to the bus provided by Montreal airport authorities. Friends and family were gathered together to await their loved ones in arrivals. The aircraft will be removed from service for full inspection, and WestJet will work with the Transportation Safety Board of Canada to investigate this incident.

We’d like to thank the fast-acting first responders and our partners at the Montreal airport authority for seeing to the safety of our guests and crew. Thanks also to those who have reached out showing concern for all involved.

CanJet Airlines (2nd) (Halifax) will lay off 47 pilots and 68 permanent and seasonal flight attendants because the airline is dropping its unprofitable seasonal flights to Europe. According to this report by Halifax Herald, the airline is considering a low-cost schedule service alternative. This is the second setback for the struggling carrier after Air Transat (Montreal) announced previously it was acquiring its own Boeing 737s after CanJet had been operating for Air Transat. As a response, CanJet formed CanJet Vacations (Toronto).

Air France (Paris) is downsizing the number of Boeing 747-400 (above) routes next winter to only one route; the Paris (CDG) – Mexico City route, starting on October 25, per Airline Route.

Porter Airlines (Toronto-Billy Bishop City Centre) is supporting the Pan American Games and the host city of Toronto in 2015 with a new logo on Bombardier DHC-8-402 (Q400) C-GKQF (msn 4391) above and below.

About the Pan American Games:

The Pan American Games are the world’s third largest international multi-sport Games; they are only surpassed in size and scope by the Olympic Summer Games and the Asian Games.

While the Pan Am Games have been hosted in a dozen countries throughout the Americas, Canada has had the honour of hosting them twice; in 1967 and 1999 and both times in Winnipeg, Manitoba.

In 2015, Toronto will be the proud Host City of the Pan Am and Parapan Am Games.

In other news, Porter Airlines is adding a second weekly flight to Stephenville, Newfoundland, this summer, as it seeks to improve travel options for southwestern and western Newfoundland. Increased service begins June 20, 2015, connecting nonstop to Halifax.

In other news, Delta is bringing back the Boeing 747-400 on the Atlanta-Honolulu route starting on May 1.

Air Canada (Montreal) is following the actions of WestJet (Calgary) and will now charge for the first checked bag on domestic flights flying on Economy Class Tango fare. The airline issued this statement:

Starting September 18, 2014, customers purchasing Air Canada’s lowest Economy Class Tango fare for travel on or after November 2, 2014 on domestic flights within Canada and to and from the Caribbean and Mexico will now be charged $25 for a first checked bag, in line with the baggage allowance policies of other North American carriers. This change is expected to affect an estimated one in five Air Canada passengers on domestic flights within Canada, representing approximately five per cent of the airline’s customers system-wide.

The fee for a first checked bag does not apply to Economy Class tickets purchased using Flex and Latitude fares that offer additional flexibility. In addition, the first checked bag fee does not apply to Altitude Prestige, Elite and Super Elite members, Star Alliance Silver and Gold members and customers purchasing Air Canada Vacations packages. Business Class customers continue to receive an allowance of two checked bags, and military personnel (with identification) up to three checked bags, regardless of destination. Air Canada’s baggage allowance policy continues to allow for a car seat and stroller to be checked as additional pieces of baggage free of charge.