Hawaiian Airlines welcomed guests aboard its inaugural flights between Fukuoka Airport (FUK) and Honolulu’s Daniel K. Inouye International Airport (HNL) with festive gate-side celebrations in both cities as the carrier marked the start of its four-times-weekly nonstop service with Airbus A330 aircraft. 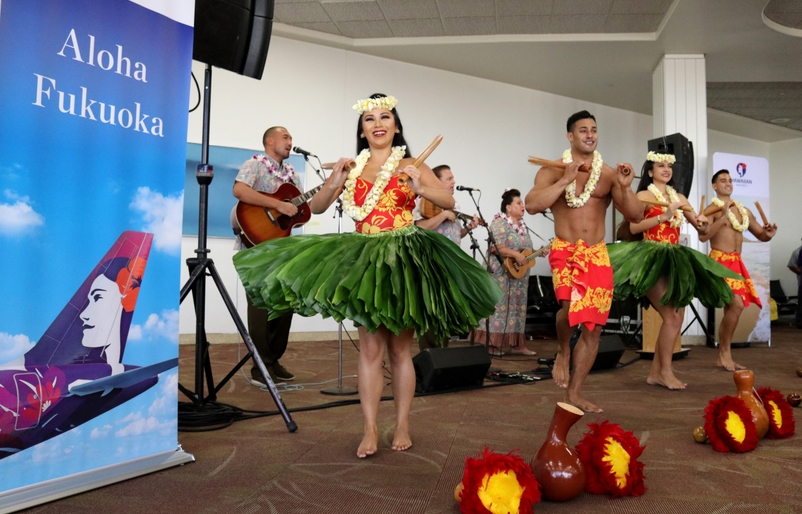 Hawai‘i’s flagship carrier delighted guests with performances by the Hawaiian Airlines Serenaders music and hula troupe, as well as fresh lei and special keepsakes including a canvas tote and luggage tag commemorating the airline’s inaugural flight.

Hawaiian Airlines President and CEO Peter Ingram addressed guests in Honolulu to mark the return of service to its sister city. Ross Higashi, deputy director of the State of Hawai’i Department of Transportation – Airports and Koichi Ito, Consul General of Japan also offered congratulatory remarks before the inaugural flight, HA827, departed HNL on Nov. 26 at 11:20 a.m., arriving into FUK at 5:21 p.m. the following day. 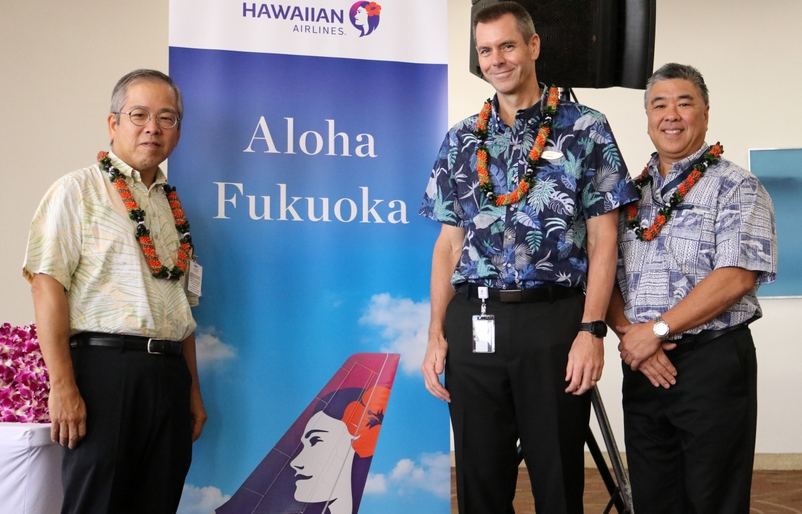 In Fukuoka, Theo Panagiotoulias, Hawaiian’s senior vice president of global sales and alliances, and John C. Taylor, principal officer of the U.S. consulate in Fukuoka joined guests in celebrating HA828, which departed FUK at 7:55 p.m. on Nov. 27. The flight’s 8:45 a.m. scheduled arrival at HNL on the same day gives travelers the afternoon to explore O‘ahu or connect to one of Hawaiian’s seven neighbor island destinations. 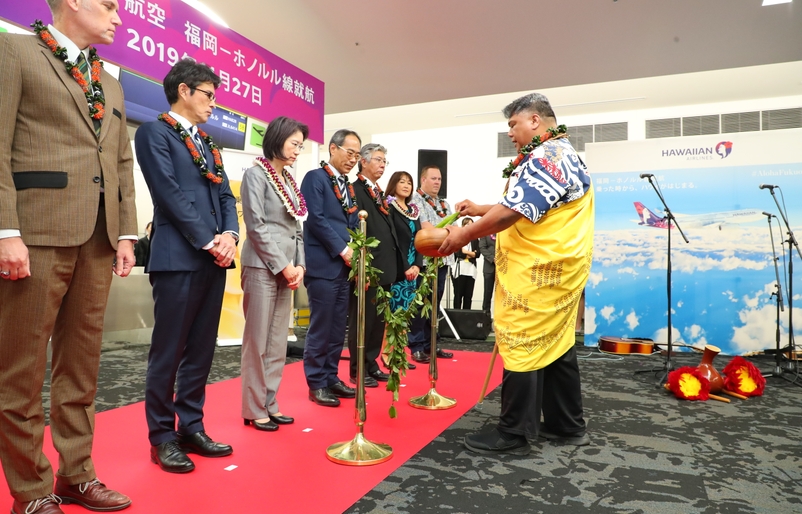 Guests traveling between Fukuoka and Honolulu will enjoy the roominess and comfort of Hawaiian’s Airbus A330 aircraft, which features 18 fully flat Premium Cabin leather seats arranged in a 2-2-2 configuration tailored for couples, families and honeymooners while offering great functionality to business travelers. Hawaiian also offers 68 of its popular Extra Comfort seats with more legroom and enhanced amenities, in addition to 192 Main Cabin seats. All guests will enjoy Hawaiian’s award-winning hospitality, including island-inspired meals prepared by Hawai‘i’s top chefs, as well as new in-flight amenities by Kealopiko, designers of contemporary island apparel.

Hawai‘i has strong historical ties to Fukuoka dating back to 1885 when the first 149 immigrants arrived on the ship Yamashiromaru to work in Hawai‘i following King David Kalakaua’s signing of a treaty of reciprocity with Japan.

A century later, in 1981, the State of Hawai‘i passed a resolution establishing a Sister-State relationship with Fukuoka Prefecture, the first one in Hawai‘i’s history. Then- Hawai‘i Gov. George Ariyoshi, whose father Ryozo Ariyoshi came to Honolulu from Fukuoka, led the Sister-State initiative.

Skymark Airlines (Tokyo-Haneda) announced today (January 29) it was filing for bankruptcy protection with the district court in Tokyo. The reorganizing airline announced it would eliminate 15 percent of its flights and ground its Airbus A330-300s on January 31 according to ZipanguFlyer.

Japan Airlines (JAL) (Tokyo) and S7 Airlines (Novosibirsk), both members of oneworld®, have agreed to further expand the code share flights with adding 12 domestic destinations in Russia from March 19, 2014.

The new codeshare routes between Moscow (Domodedovo) and domestic cities in Russia includes Saint Petersburg, the second largest city in Russia, and also Sochi, which is the host city of the 2014 Winter Olympic and Paralympic Games as well as other attractive cities.

Routes between Moscow (Domodedovo) and domestic cities in Russia

* All of the above flights are operated by S7.

* Flight schedule and dates are subject to changes. Please visit JAL website for the latest information.

Passengers with reservations to fly after June 30 will be re-accommodated. The airline’s reservations department will be contacting affected passengers in the next several weeks. The airline will continue to accept reservations for travel between Honolulu and Fukuoka prior to June 30, 2014.

Fukuoka was the third destination in Japan, following Tokyo (November 2010) and Osaka (July 2011).

ANA (All Nippon Airways) (Tokyo) and Garuda Indonesia (Jakarta) have announced a comprehensive partnership under which the two airlines will code share on flights between the two countries and will allow passengers to be able to collect and redeem miles on Frequent Flyer Program of both airlines.

From March 30, 2014, ANA will operate new route between Tokyo’s Haneda Airport and Jakarta Airport, followed by Garuda Indonesia opening the same route from the first quarter of 2014. These new flights will increase the number of weekly flights operated by the two carriers between Japan and Indonesia to 53 – comprising 14 ANA flights and 39 Garuda Indonesia flights. Both airlines will be providing improved and expanded customer service concurrent with this agreement and network expansion.

The two airlines will also start discussions on a partnership between their respective mileage programs. The details of joint mileage program, including the start date, will be announced separately on both companies’ websites when decided.

However the new airline won’t fly after the two prospective ATR 72-600s (JA01LK and JA02LK) were painted at Toulouse. The company, established on April 5, 2012, filed for bankruptcy protection on December 10, 2013 after failing to raise enough capital to start operations. The airline will now be liquidated. The would-be airline owed around eighty creditors according to local reports.

The airline had a technical and training support agreement with StarFlyer. Link Airs applied for an AOC in July 2013.

Link Airs would have been the first operator of ATR aircraft in Japan.

Copyright Photo: Olivier Gregoire/AirlinersGallery.com. The pictured ATR 72-212A (ATR 72-600) with the test registration of F-WWET at Toulouse would have become JA02LK on delivery that never happened.

ANA (All Nippon Airways) (Tokyo) has decided to move ahead with the merger of its subsidiaries. Air Central and Air Next will be merged into Air Nippon (Air Nippon Network Company) on October 1, 2010. Air Nippon in turn will be renamed ANA Wings (ANA Wings Company Limited) on October 1.

Bombardier Aerospace (Toronto) has confirmed that a firm order for five Q400 NextGen aircraft and options for another five, which was previously announced on August 3, 2009, was placed by All Nippon Airways Co. Ltd (ANA) (Tokyo).