Video Above: Boeing: Boeing Test Pilot Chad Lundy steps us through the breathtaking Vietnam Airlines 787-9 flying display at the Paris Air Show today, explaining how the crew positions the airplane to best show off its maneuverability and grace and highlighting the operational and environmental benefits of the innovation built into every Dreamliner.

Airbus (Toulouse) brought its new Airbus A350-900 yesterday (June 21) to the Paris Air Show for a brief fly-by.

The manufacturer issued this statement:

As part of its third test flight from Airbus’ Toulouse headquarters in southwestern France, the number 1 A350 XWB headed north to offer a show-stopping performance in the skies above Le Bourget Airport today – where a large crowd gathered to witness the fly-by of this new highly-efficient wide-body jetliner.

The aircraft, designated msn 001 in Airbus’ numbering system, made a dramatic entrance over Le Bourget at approximately 1:30 p.m. – marking its first appearance at a public event.  Cheers and applause from the crowd drowned out the A350 XWB’s quiet Rolls-Royce Trent XWB engines as the aircraft flew along the air show runway before clearing the area and entering the cloud cover.

Piloted by Airbus Captain Peter Chandler and Captain Guy Magrin, the A350 XWB’s fly-by was performed with the authorisation of the France’s DGAC civil aviation authority, and supported by Paris Air Show organisers – who allocated a slot in Friday afternoon’s aerial display.

The A350 XWB performed its first flight on June 14, 2013 from Toulouse and followed that with another mission this week, before its fly-by at the Paris Air Show. These initial flights opened a test and certification campaign that will total approximately 2,500 hours with a fleet of five development aircraft.

Copyright Photo: Airbus. A350-951 F-WXWB (msn 001) flies over a mostly cloudy Paris Air Show at Le Bourget Airport on the longest day of the year.

The 2013 50th International Paris Air Show at Le Bourget Airport is winding down for the manufacturers. We have been reporting this week on all of the order announcements.

There were several airliner flight demonstrations. Here is a sample:

Airbus demonstrated an A380 bound for British Airways at Paris:

Kingfisher Airlines‘ (Mumbai) Scheduled Operator’s Permit (SOP) is due to expire today (December 31) according to this report to The Economic Times. The carrier had proposed to restart scheduled operations with five Airbus aircraft and two ATRs but the Indian government was concerned about its financing and funding and asked for additional details. The airline suspended operations on October 4, 2012.

Aeroflot Russian Airlines (Moscow) will introduce an Airbus A320 retrojet in 2013 painted in the 1956 Tupolev Tu-104 livery. The company has issued the following statement:

On November 12, 2012 the open Internet voting for Aeroflot new aircraft retro livery was finished. Celebrating the company’s 90-th Anniversary, an airplane in a heritage livery will join the Aeroflot fleet in 2013.

In the middle of this summer Aeroflot addressed to its passengers through social networks, asking about their vision of expected Aeroflot jubilee events. As a result, more than 45 per cent of our flyers wished to see one of the national carrier’s aircraft in a retro livery.

So, the voting in Aeroflot official Facebook group had begun. There were four candidates representing four different types of painting historically worn by Aeroflot airplanes. More than 2500 passengers participated in the voting process, and the livery of one of the first world’s jet airliners – Tupolev Tu-104 (appeared in 1956) was declared a winner.

During the voting Aeroflot received from its passengers a lot of useful recommendations and remarks, which will allow updating and improving of the color scheme of the livery.

One of the brand new A320 aircraft to make part of Aeroflot fleet in the first middle of 2013 will wear a retro livery. The painting itself will be made at the Airbus manufacturing plant.

Bottom Copyright Photo: Jacques Guillem Collection. Tupolev Tu-104B CCCP-42507 (msn 021905) in the original 1956 livery taxies away from the departure gate at Le Bourget Airport in Paris. Aeroflot introduced the new jet type on September 15, 1956 on the Moscow-Omsk-Irkutsk route. This was the world’s first sustained jet airline service. Aeroflot commenced international flights with the Tu-104 on October 12, 1956 from Moscow to Prague.

AeroSvit Ukrainian Airlines (Kiev) will start operating its new Antonov An-148 to Russia starting next month. The new type has been operating on domestic routes.

Please click on photo or link below for full view, information, prints for sale or other photos: 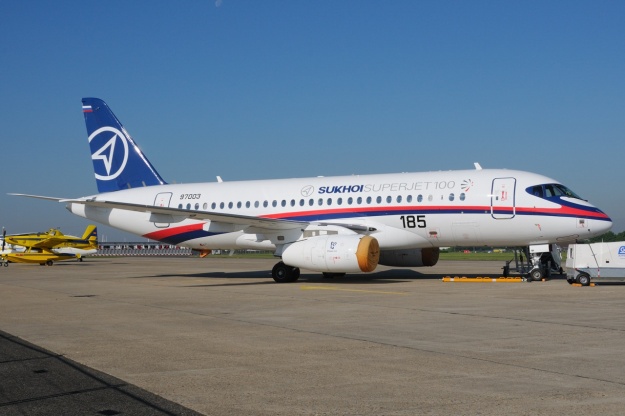 Sukhoi (Moscow) has sold 24 Superjet 100s to Avia (Moscow), a leasing company in Russia. So far, Sukhoi is leading the order parade at the Paris Air Show. 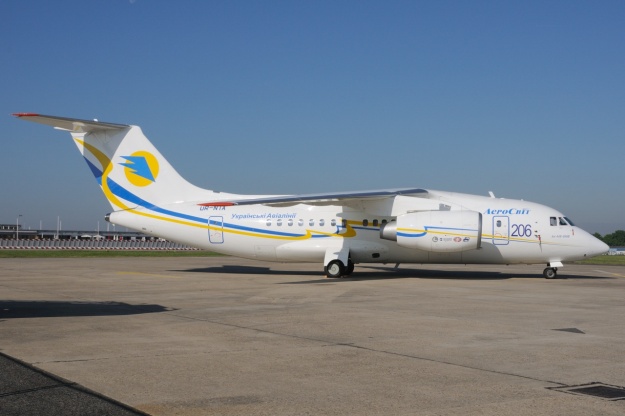 Please click on photo for full view, information and other hot photos.