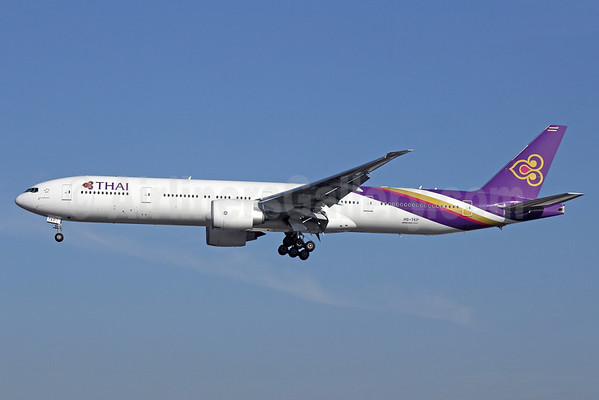 Thai is also ending the Bangkok – Rome (FCO) route on the same day.

Thai Airways International (Bangkok) is also planning to retire its Airbus A340-600s. According to Airline Route, the last revenue flight for the aging type is currently scheduled for the Frankfurt – Bangkok route as flight TG 293, departing on FRA late on March 28 and arriving the next day at BKK.

Boeing (Chicago) and Thai Airways International Public Company Limited (Bangkok) yesterday (January 21) celebrated the Thai flag-carrier’s 75th direct delivery of a Boeing airplane. Marking the milestone delivery, Boeing and Thai collaborated to transport 1,000 wool blankets onboard Thai’s newly delivered 777-300 ER (Extended Range). The blankets, donated by Another Joy Foundation, will be distributed by the airline to people in need in Thailand during the colder winter months.

This latest humanitarian effort, the third between Boeing and Thai, is part of Boeing’s long-running Humanitarian Delivery Flights program.

Boeing’s Humanitarian Delivery Flights program, which began in 1992, has worked in partnership with nearly 50 carriers worldwide to facilitate more than 170 humanitarian flights. On previous delivery flights, Thai and Boeing have provided medical kits and school supplies.

Thai currently operates four 787 Dreamliners and has operated nearly every model of the 777. Thai Cargo was the first carrier in Southeast Asia to utilize the 777 Freighter. The airline has an additional two 777-300 ERs on order.

Photo: Boeing. Brand new Boeing 777-3D7 ER HS-TKX (msn 42113) departs from an overcast Paine Field near Everett yesterday. The new airplane was handed over to the carrier on January 21.

ACM Siwakiat Jayema, Acting President of Thai Airways International said, “As the national airline, the addition of the 787 to our fleet is a major milestone for Thai and Thailand. Boeing and AerCap have provided an airplane that is perfect for Thai and our passengers.” The 787-8 is the first of eight Dreamliners that Thai will lease from AerCap (six 787-8 set for delivery between 2014-2015, and two 787-9 for delivery in 2017).

Thai’s 787 Dreamliner is configured with 24 lie-flat seats in Royal Silk Class and 240 seats in Economy Class. The 787-8 is a mid-size aircraft that can fly longer distances and offer great fuel efficiency, complete with the interior environment that has been designed to make passenger travel comfortable and convenient.

Thai’s Boeing 787-8 aircraft is equipped with the next-generation Rolls-Royce Trent 1000-AE engines. The culmination of advanced aerodynamics, and lightweight structures contribute to 20 per cent reduction in fuel consumption and CO2 emissions, as well as less “roar” around airport boundaries and airport communities. 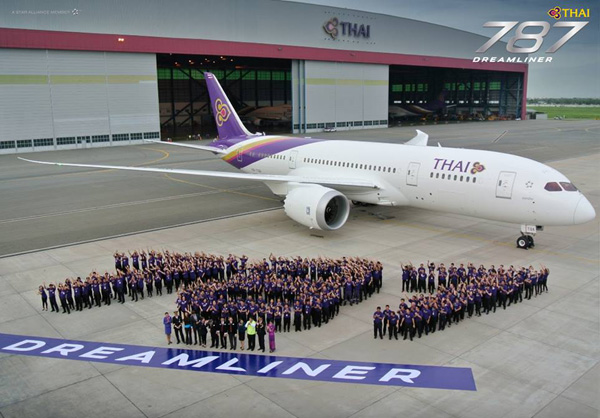 Thai Airways International (Bangkok) has released this photo of its first Boeing 787-8 Dreamliner. The pictured HS-TQA (msn 35315) is being prepared for the handover at Boeing’s Paine Field plant.

Thai Airways International (Bangkok) is currently now planning to retire its last Airbus A300-600 on July 31, 2014 (moved up from October 25, 2014) per Airline Route. The airline is operating the type of flights from the Bangkok hub to Chiang Mai, Chiang Rai, Khon Kaen and Phuket.

Thai Airways International (Bangkok) is planning to introduce its Airbus A380 on the Bangkok-London (Heathrow) route starting on December 1 per Route News.

Top Copyright Photo: Ole Simon/AirlinersGallery.com. Airbus A380-841 HS-TUC (msn 100) climbs away from Frankfurt (please click on the photo for the size view).

According to the airline, “several remarkable uniforms since 1960 include the first one ever, pale purple dress topped by a cute pillbox hat, the new look design in 1977 which featured various colours in the collection, mauve, pastel pink, yellow and sky blue, and the Balmain outfits, designed by French couturier Pierre Balmain in 1987, that look distinctive with the colour of Thai orchids, elegant and feminine, yet entirely practical.

Nowadays, Thai cabin crew wears a uniform designed by Ms. Pichitra Boonyarataphan, a Thai designer who won the uniform competition in 2005, with a stylish contemporary fashion blended with Thai’s traditional concept of the uniform.”