The newest addition to the QANTAS Airways fleet has touched down on Australian soil, proudly carrying a retro livery and bearing the name of trailblazing former CEO James Strong.

The design is a flashback to the livery that adorned QANTAS Boeing 747s in the 1970s and is a flying tribute to mark seven decades of the Flying Kangaroo logo, which falls this month.

QANTAS Airways CEO Alan Joyce joined past and present staff and executives, Boeing executives and other guests to welcome the aircraft after it was given a water cannon salute from Air Services Australia.

The aircraft is named after former CEO James Strong. James was instrumental in the making of the modern QANTAS, including the merger with Australian Airlines.

James Strong was QANTAS CEO from 1993 to 2001 and later served on the QANTAS Board until his death in March 2013. His wife Jeanne-Claude and son Nicholas were at the hangar to christen the aircraft.

The new Boeing 737-800, the 75th of the aircraft type, will begin services across the QANTAS domestic network from next week. It is the 11th new Boeing aircraft that the QANTAS Group has taken delivery of this year.

The delivery of the “retrojet” coincides with the week of QANTAS’ 94th birthday, which was celebrated on Sunday November 16. The Queensland and Northern Territory Aerial Services Limited (QANTAS) was registered as a business on November 16, 1920.

QANTAS Airways (Sydney) is going to introduce a retrojet in November with the delivery of its 75th Boeing 737-800 (VH-XZP). The airline issued this statement:

For the first time in QANTAS’ 94 year history, the airline will introduce a “retro” livery on one of its brand new Boeing 737 aircraft as a flying tribute to 70 years of its iconic kangaroo logo.

The original kangaroo symbol, that was adapted from the Australian one penny coin, was initially painted beneath the cockpit of QANTAS’ first Liberator aircraft G-AGKT in 1944 following the airline’s decision to name its Indian Ocean passage the Kangaroo Service.

Group Executive for Brand, Marketing and Corporate Affairs, Olivia Wirth said the kangaroo that now features on the tail of every single QANTAS aircraft is well and truly part of the Australian story.

“For 70 years the flying kangaroo has been a symbol of aviation innovation around the world, driving higher standards in safety, technology, product and service,” said Ms Wirth.

“Our kangaroo logo represents our proud history, inextricably linked with the development of commercial aviation in Australia. It has also become a symbol of ‘home’ to Australians travelling both here and abroad.

“A retro livery is the perfect tribute to our iconic flying kangaroo logo and its 70th anniversary. While it serves as a nod to our heritage, having it fly on one of our brand new Boeing 737-800s highlights our commitment to being an aviation innovator when it comes to new aircraft and modern technology.

“QANTAS has flown under many liveries throughout its 94 year history and I know this historic design will bring back a lot of memories for many of our customers who have chosen to fly with us over the years.”

QANTAS will take delivery of its new Boeing 737-800 from the Boeing Factory in Seattle in late November. It will be the 75th Boeing 737-800 to join the QANTAS fleet.

History of the flying kangaroo:

The original Kangaroo symbol appearing on QANTAS aircraft was adapted from the Australian one penny coin.

1944 – The kangaroo was first painted beneath the cockpit of QANTAS’ (Queensland and Northern Territory Aerial Services) first Liberator aircraft G-AGKT, following QANTAS’ decision to name its Indian Ocean passage the Kangaroo Service. The symbol featured on all later aircraft.

1947 – The winged kangaroo symbol was created for the introduction of QANTAS’ Lockheed 749 Constellations. They were the first QANTAS aircraft to carry the Flying Kangaroo and the first to operate right through to London with QANTAS crews. The Flying Kangaroo was later placed in a circle in 1968.

1984 – The Flying Kangaroo lost its wings once again in an updated logo and was refined to a more slender, stylized presentation.

1995 – A logo created for the airline’s 75th anniversary year was added to all QANTAS jet aircraft. It brought together the Flying Kangaroo symbol and the words ’75 years’ to mark QANTAS’ contribution to civil aviation.

2007 – QANTAS unveiled a new interpretation of its iconic logo, designed to reflect the changing structure of the airline’s new generation aircraft, and keeping with Qantas’ increasing focus on contemporary design for its in-flight and on-the-ground products.

A history of the QANTAS logos: 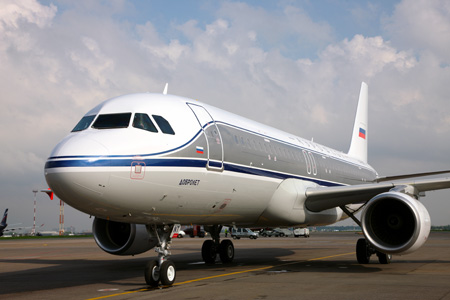 The only air plane in a retro livery in Russia has joined the Aeroflot fleet celebrating the 90th Anniversary of the national flag carrier.

In late 2012 Aeroflot organized a voting in social networks to choose the best livery for its retro-jet. More than 2500 people participated in the voting process, and the livery of one of the first world’s jet airliners — Tupolev Tu-104 (appeared in 1956) was declared a winner. In the opinion of the majority of voters was this livery carried the spirit of the “romantic” 1950s, the time when the air transport industry in the country was rapidly growing and significant achievements were made in the national air construction.

The final draft of the livery to be painted on the newest Airbus A320 was designed in accordance with the voters’ comments, taking into account safety standards and recommendations from Airbus and Akzo Nobel specialists considering the paint spraying and its technical and performance parameters.

The retrojet is named “DOBROLET” after the Open Joint Stock Company found on March 17, 1923, which was the predecessor of Aeroflot. The newcomer to the Aeroflot fleet is to demonstrate the vast historical inheritance of the air company and to attract interest of the public to the long and rich history of Aeroflot.

Gaining from the synergy of prominent heritage and modern innovative development, the Russian national flag carrier, one of the oldest air companies in the world, operates one of the youngest air fleets in Europe. Currently there are 137 aircraft in Aeroflot including 87 Airbus A319/320/321 family planes.

All Airbus aircraft are received by Aeroflot directly from Airbus manufacturing plants. The airplanes are designed in two class composition and can carry 116 (A319), 140 and 158 (A320) and 170 (A321) passengers. These aircraft provide services on European and Russian domestic destinations. Airbus A320 family airplanes satisfy the highest reliability, safety and comfort standards and are one of the best for mid-range flights.

Bottom Copyright Photo: Eurospot/AirlinersGallery.com. The airframe was tested at Toulouse as F-WWIF.

Aeroflot Russian Airlines (Moscow) as we first reported on November 19, 2012, is getting ready to introduce this 1956 retrojet.

Aeroflot issued this statement back in November:

On November 12, 2012 the open Internet voting for Aeroflot new aircraft retro livery was finished. Celebrating the company’s 90th Anniversary, an airplane in a heritage livery will join the Aeroflot fleet in 2013.

In the middle of this summer Aeroflot addressed to its passengers through social networks, asking about their vision of expected Aeroflot jubilee events. As a result, more than 45 per cent of our flyers wished to see one of the national carrier’s aircraft in a retro livery.

So, the voting in Aeroflot official Facebook group had begun. There were four candidates representing four different types of painting historically worn by Aeroflot airplanes. More than 2500 passengers participated in the voting process, and the livery of one of the first world’s jet airliners – Tupolev Tu-104 (appeared in 1956) was declared a winner.

During the voting Aeroflot received from its passengers a lot of useful recommendations and remarks, which will allow updating and improving of the color scheme of the livery.

One of the brand new A320 aircraft to make part of Aeroflot fleet in the first middle of 2013 will wear a retro livery. The painting itself will be made at the Airbus manufacturing plant.

Copyright Photo: Eurospot. The pictured brand-new Airbus A320-214 has been painted in a modified 1956 almost-retro livery. Still carrying the test registration of F-WWIF, the airframe will be delivered as VP-BNT (msn 5614). The airliner is pictured at Toulouse today.

British Airways (London) as we reported earlier rolled out on schedule at London Heathrow its Boeing 757-236 G-CPET (msn 29115) in the 1973 color scheme to celebrate the retirement of the type on October 30 after over 27 years of faithful service. 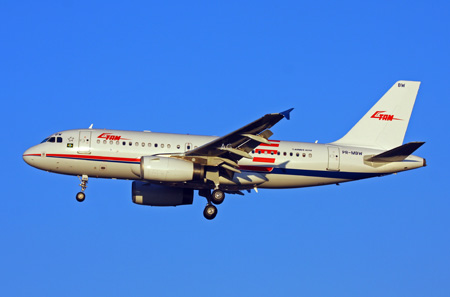 TAM Airlines (TAM Linhas Aereas) (Sao Paulo), Airbus’ biggest customer in the southern hemisphere and Brazil’s largest airline company, announced an order for 20 new Airbus A320 Family and five A350-900 aircraft, bringing the Brazilian airline’s total Airbus orders to 176 aircraft, including 134 A320 Family, 15 A330-200s and 27 A350 XWB aircraft. The Memorandum of Understanding outlining the order was signed during the ILA Air Show in Berlin.

The new A350-900 aircraft will be powered by Rolls Royce engines. TAM is yet to select engines for the new 20 A320 Family aircraft. The airline currently operates its existing fleet of A320 Family with both CFM and IAE engines.

Alaska Airlines (Seattle/Tacoma) has suspended all flights north of Anchorage due to the eruption of Mount Redoubt on March 23 and the airborne volcanic ash which can cause engine failures. The cities impacted include Barrow, Bethel, Fairbanks, Kotzebue, Nome and Prudhoe Bay. So far, 45 flights have been cancelled.